by
Lord Keynes
My articles My siteAbout meMy booksMy videos
Follow on:Twitter
Summary:
From 1933 to 11 March 1938, Austria was ruled by the clerical fascist Fatherland Front in a regime called the Austrian Federal State.The two dictators of Austria in this period were as follows:Dictators of the Austrian Federal State 5 March 1933–25 July 1934 – Engelbert Dollfuss 29 July 1934–11 March 1938 – Kurt SchuschniggAlthough the Fatherland Front had some anti-capitalist elements, the fact is that in power Engelbert Dollfuss and Kurt Schuschnigg pursued spending cuts, austerity, budget balancing and wage and price deflation.In this period, Ludwig von Mises had a fascinating relationship with the clerical Austro-fascist regime.Already around 1930, before the Austrian fascists seized power, Mises joined an Austrian government economic commission to study the causes of the depression


Chris Blattman writes Review of Why We Fight in Das Milieu

Bibliography on Marx’s Law of the Falling Rate of Profit

From 1933 to 11 March 1938, Austria was ruled by the clerical fascist Fatherland Front in a regime called the Austrian Federal State.

The two dictators of Austria in this period were as follows:

Although the Fatherland Front had some anti-capitalist elements, the fact is that in power Engelbert Dollfuss and Kurt Schuschnigg pursued spending cuts, austerity, budget balancing and wage and price deflation.

In this period, Ludwig von Mises had a fascinating relationship with the clerical Austro-fascist regime.

Already around 1930, before the Austrian fascists seized power, Mises joined an Austrian government economic commission to study the causes of the depression in Austria, along with (interestingly enough) the future Austro-fascist leader Engelbert Dollfuss (Hülsmann 2007: 614), to whom Mises was later to give economic advice. The report of the committee blamed (1) inflationary expectations in Austria and (2) rises in taxation and government spending and increased wage rates (which had all squeezed business profits) for the inability of Austria to attract foreign capital needed to facilitate quicker adjustment and recovery from the depression (Hülsmann 2007: 614–615).

On February 28, 1931, Mises gave a lecture called “The Causes of the World Economic Crisis” in Czechoslovakia (Mises 2006 [1931]), and, as a remedy for the depression, Mises advocated eliminating unemployment relief (presumably forcing the unemployed to starve and accept lower wages), cutting government spending and taxes (Mises 2006 [1931]: 175), not only to cut wages, but also to make wage determination free from labour unions (Mises 2006 [1931]: 169).

Hans-Hermann Hoppe (an Austrian economist) relates that Mises was later a close adviser of Dollfuss:

“Engelbert Dollfuss [sc. was] ... the Austrian Chancellor who tried to prevent the Nazis from taking over Austria. During this period Mises was chief economist for the Austrian Chamber of Commerce. Before Dollfuss was murdered for his politics, Mises was one of his closest advisers.”
Hans-Hermann Hoppe, “The Meaning of the Mises Papers,” April 1997
https://mises.org/library/meaning-mises-papers

Even after his move to Geneva in 1934, Mises was still employed by the Austrian government, visited Austria periodically, and continued to do work for the government (Hülsmann 2007: 884). And, as late as February 1938, the Austro-fascist regime of Schuschnigg asked Mises to become Chief of the Department for Monetary and Financial Affairs, and Mises came to Vienna to discuss this offer in February 1938 as well (Hülsmann: 2007: 723).

The clerical fascist pursued many of the policies Mises had advocated:

“In tackling the economic crisis the Dollfuss-Schuschnigg dictatorship pursued harsh deflationary policies designed to balance the budget and stabilize the currency. The government’s program featured severe spending cuts, high interest rates, and frozen wages. …. In a sense the Christian Corporative regime demonstrated the viability of the Austrian state, but it did so at the cost of alienating a majority of the Austrian people. On the eve of Anschluss a third of the population was still out of work, while those fortunate enough to have jobs were bringing home paychecks considerably smaller than before the Great War” (Bukey 2000: 17).

“Beginning in in 1931, [Austrian] unemployment grew rapidly, reaching a peak in 1933–6, with between 24 and 26 per cent of the labour force out of work .... When, in 1937 and 1938, there was a modest recovery, unemployment never dropped below the 20 per cent value. This had a devastating effect on the legitimacy of the Austrian system .... As the Austrian government sustained its reluctance to apply Keynesian policies, the economic recovery never entered a serious tale-off phase in the second half of the 1930s. Linked to an exhausted determination of the Austrian government to resist the pressures from Germany, the economic crisis of the 1930s should be seen as an additional reason why the Austrian society was receptive to the annexation by Germany in March 1938” (Gerlich and Campbell 2000: 55).

We can see the spending cuts and attempts to balance the budget in the graph below of budget deficits in pre-1938 Austria from 1934–1938 in millions of schillings (data from Fibich 1977: 170 ff.; to get a high quality version of the graph, click on it or open it in another tab). 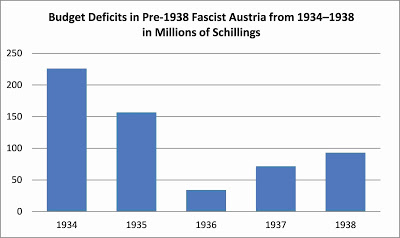 Some of the austerity policies included:

How did the economy perform under this austerity?

The Austrian economy was awful.

Real GNP growth was mostly feeble in the 1930s in the years after the actual contraction ended as we can see here:

Austrian unemployment was also a disaster. There are two estimates of Austrian unemployment I have found: Maddison (1982: 206, Table C6) and Stiefel (1979: 29), but I would assume that Stiefel’s estimates are better, given that he is an Austrian scholar and his estimates are cited in Emmerich Tálos’s Das austrofaschistische Herrschaftssystem: Österreich 1933–1938 [The Austro-Fascist Regime: Austria 1933–1938] (2nd edn. 2013, Vienna; p. 330, Tabelle 1).

We can see the two estimates of Austrian unemployment in the 1930s in the graph below (to get a high quality version of the graph, click on it or open it in another tab): 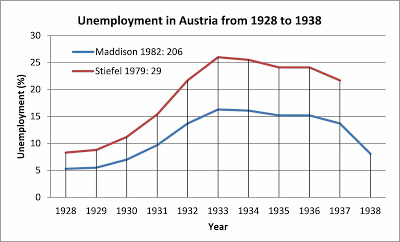 As we can see, unemployment soared to high levels by 1933, and remained stubbornly high until 1937, by either measure.

History also ran a most fascinating experiment for us from 1933 to 1939.

While in Austria, the clerical fascists pursued austerity and wage and price deflation from 1934 to 1937, in Germany the National Socialist government of Hitler implemented a series of economic interventions that involved large government deficits, direct public works programs, and rearmament. This program was undoubtedly Keynesian in its fiscal effects, despite some modern attempts to deny this like Tooze (2008) (on the simulative nature of Germany’s deficits and policies after 1933, see Cohn 1992; Fremdling and Stäglin 2015; Overy 1996). The fact that German military spending was higher by 1935 than some historians have thought does not change the reality that military Keynesianism is still Keynesianism. It is clear that German policy down to 1936 was a mix of military and civilian Keynesian spending.

We can see this in the graph below (with German unemployment rate from Mitchell 1992: p. 160 and 163, B2, and Austrian unemployment from Stiefel 1979: 29; to get a high quality version of the graph, click on it or open it in another tab): 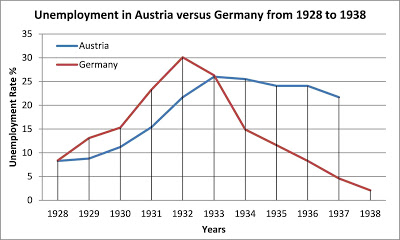 Popular support for the Austro-fascist regime collapsed by 1938 given the economic disasters and high unemployment, and when Hitler annexed Austria in March 1938 there was no doubt a great deal of support for the Anschluss within Austria.

Paradoxically, Mises – even though he declared that Italian fascism “saved European civilisation” from Communism (Mises 1978: 51) – had a real role in killing Austrian fascism through his policy advice to pursue austerity and wage and price deflation, which failed to induce any real recovery from the high unemployment.

I have rarely seen Austrians and other libertarian supporters of Mises address the question of why their cult leader’s austerity policies failed so miserably to produce any serious recovery in Austria.

Tooze, Adam. 2008. The Wages of Destruction: The Making and Breaking of the Nazi Economy. Penguin, London and New York.

Zero Hedge — Kolanovic: There Is A “Profound” Danger To The Dollar’s Reserve Status