An Experiment with Basic Income

by
Frances Coppola
My articles My siteAbout meMy booksMy videos
Follow on:Twitter
Seeking Alpha
Summary:
In 1795, the parish of Speen, in Berkshire, England, embarked on a radical new system of poor relief. Due to the ruinous French wars and a series of poor harvests, grain prices were rising sharply. As bread was the staple food of the poor, rising grain prices increased poverty and caused unrest. Concerned by the possibility of riots, the parish decided to provide subsistence-level income support to the working poor. The amounts paid were anchored to the price of bread. Each member of a family qualified for a payment, so the larger the family, the more they received. In effect, it was a system of in-work benefits. Subsistence-level income support already existed for the non-working poor. The Poor Laws, first introduced in Elizabethan times, distinguished between different categories of


Sandwichman writes Disposable time as a common-pool resource I — Introduction 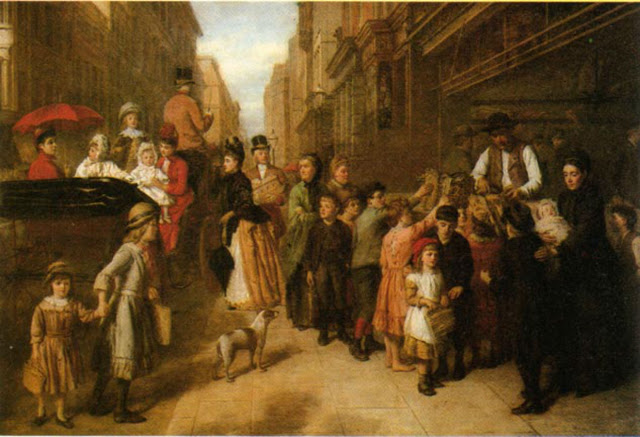 In 1795, the parish of Speen, in Berkshire, England, embarked on a radical new system of poor relief. Due to the ruinous French wars and a series of poor harvests, grain prices were rising sharply. As bread was the staple food of the poor, rising grain prices increased poverty and caused unrest. Concerned by the possibility of riots, the parish decided to provide subsistence-level income support to the working poor. The amounts paid were anchored to the price of bread. Each member of a family qualified for a payment, so the larger the family, the more they received. In effect, it was a system of in-work benefits.

Subsistence-level income support already existed for the non-working poor. The Poor Laws, first introduced in Elizabethan times, distinguished between different categories of “poor” and treated them differently. At the time that the Speenhamland system was introduced, the old, inflrm and children were placed in poorhouses, where they were cared for and were not expected to work (this was known as “indoor relief”), while the able-bodied poor were expected to work for their benefits (“outdoor relief”). There were a variety of measures forcing the unemployed to work, of which probably the most hated – and economically the most disastrous – was the roundsman system. Unemployed labourers (“roundsmen”) were “sold” to farmers at below market rates, and the parish topped up the wages to subsistence level. It was in effect a job guarantee.

But the Speenhamland system did not make working a condition of benefit eligibility. Its combination of existing out-of-work relief – with or without job guarantee - with a new system of in-work benefits amounted to a basic income. The level of relief was the same whether or not family members were working, and because of concerns that people should not be discouraged from working, it did not taper off as wages rose.

And it worked. The Speenhamland system did relieve poverty and malnutrition, and prevent riots – which was its purpose. Because of this it was widely copied, and Pitt the Younger even tried to write it into national legislation. But it was not without its problems and its critics.

The great economist David Ricardo thought that the Speenhamland system reduced the supply of agricultural labour. On the face of it, this seems logical. The fact that income support was provided at the same level to both the working and the non-working poor created a disincentive to work. Or rather – since parishes found or created work for the benefit-receiving unemployed – it created a disincentive to look for work. If people opted to do the easy parish “make-work” rather than sell their labour to farms, there would indeed be shortages of agricultural labour. But I find this odd. Some people no doubt did take the easy option, but the Speenhamland poor relief was hardly generous, and it was not tapered, so getting a real job actually increased family incomes. The “benefits trap” of today, where marginal tax rates due to benefit withdrawal are so high it is not worth finding a job, did not exist. Therefore I question whether the Speenhamland system was really primarily responsible for reducing the supply of labour. I think the problem was something else.

The Poor Laws were not a consistent system. Poor relief was the responsibility of individual parishes, and coverage was therefore patchy and inconsistent. “Settlement laws” preventing people from moving from parish to parish in search of better benefits (today we call this “benefit tourism”) had the unfortunate consequence of preventing people moving from parish to parish in search of work, causing both unemployment and labour shortages. The practice of finding people work within the parish, either by auctioning out idle labour at below market rates or by assigning people to community tasks, meant that real jobs in other parishes went unfilled. And the drain of people to the factories from the land as the Industrial Revolution progressed caused shortages of agricultural labour. In my view the Speenhamland system of income support was unfairly blamed for agricultural labour shortages that were due to labour market rigidities, local job guarantees and technological change.

There is no doubt that the “roundsman” system depressed agricultural wages. Farmers had an incentive to use roundsmen in preference to free labourers because they could pay far below subsistence wages in the certain knowledge that the parish would top up the wages. Had the roundsman system been universally applied, eventually all agricultural labourers would have become roundsmen and wages would have been persistently below subsistence level. Admittedly this might have helped reduce the price of bread, thus reducing the benefits bill, but it would still not have been a sustainable system. Those in favour of a modern-day job guarantee might want to bear this in mind.

But there was a much more serious problem with land tax funding of poor relief during the Industrial Revolution. Agriculture used a relatively small number of people but a large amount of land, and therefore incurred most of the land tax. In contrast, industrial production used a large amount of people but a relatively small amount of land, and was therefore taxed much more lightly. Industrialists could therefore bid down wages of factory workers in the knowledge that the parishes would top them up: there would be a small cost to industrialists in increased rates, but the major burden would be borne by agricultural landowners. It amounted to a massive wealth transfer from agricultural landowners to industrialists. No wonder the Speenhamland system was hated by agricultural ratepayers.

So it is fair to say that Ricardo was right: the Speenhamland system did depress wages, though not because income support itself has that effect. The problem was the way it was funded.

Ricardo’s close friend Thomas Malthus criticised the Speenhamland system for its effect on population. As the amount of benefit received was determined by family size, he considered that it encouraged the poor to breed. The population of England did indeed grow very fast in the early 19th Century, but I find it hard to believe that the Speenhamland system was primarily responsible for this. There was actually an incentive to have large families even in areas that didn’t have the Speenhamland system – and that was the growing demand for child labour. Factories and mines employed children because they could pay them less than adults and because, being small, they could do tasks that adults could not – often the most dangerous tasks, such as clearing threads from under working looms. A family with several children could increase its income considerably by sending the children out to work. So Malthus was right – there was indeed an incentive for the poor to breed, and at the margin the lack of a taper on Speenhamland’s income support contributed to this. But it really can’t be regarded as the primary cause of England’s rapid population growth during the Industrial Revolution. Once again, the Speenhamland system was blamed for problems not really of its making.

But the worst criticism of the Speenhamland system, and the primary reason for its eventual abolition, was not its economic effects but its morality. And the moral criticisms still resonate today. Jeremy Bentham’s insistence that it must always be worthwhile to work, and that out-of-work benefits should therefore be difficult to obtain and set at levels below subsistence wages, has uncomfortable similarities to the calls from modern-day politicians that “work must pay”. The prevalent view of the time that working was a moral duty, and that the unemployed were morally defective, is echoed in the Conservative party’s glorification of “hard-working families” and the popular vilification of benefit claimants as “scroungers and shirkers”. And the idea that the unemployed must be forced to work to earn their benefits, even if that work is pointless and demeaning – and even if it disrupts the labour market - continues today in “workfare” schemes that force the unemployed to take basic unskilled jobs, however unsuitable for them, or lose benefits.

The Speenhamland system was a genuine attempt to ease the problems of poverty and unemployment at a time of depression and rapid technological change. It is tragic that it foundered not because it did not work, but because of inappropriate financing coupled with moral judgements about the virtue of work.

And there is an awful warning for the present day. The Speenhamland system was replaced by one of the cruellest forms of “welfare” ever devised. The Poor Law Amendment of 1834 abolished “outdoor relief” and forced the unemployed into workhouses. Conditions in workhouses were deliberately harsh, to deter people from going into them: entry to a workhouse was for many a death sentence. Married couples were separated from each other and from their children, sometimes never to meet again. Work was tedious and routine, such as unpicking rope (“picking oakum”) or breaking stones. And inmates were abused and starved: in one workhouse, at Andover, inmates were so hungry they resorted to chewing the bones they had been set to grind down for fertilizer. But it is worth remembering that harsh though the workhouses were, conditions for the working poor outside workhouses were often worse. The threat of the workhouse enabled employers to pay starvation wages in the certain knowledge that workers would accept them even though there was no form of income support. Writers such as Dickens exposed the appalling conditions in which the poor were living both inside and outside workhouses. But they were deliberately created by well-meaning people convinced of the virtue of work, any work, however demeaning and however poorly paid.

We have come a long way since the days of Dickens. Let us not go back there again.

This post was first published on Pieria in January 2014.

Image is "Poverty and Wealth", by William Frith R.A., 1888.  Courtesy of VictorianWeb.

I’m Frances Coppola, writer, singer and twitterer extraordinaire. I am politically non-aligned and economically neutral (I do not regard myself as “belonging” to any particular school of economics). I do not give investment advice and I have no investments.Coppola Comment is my main blog. I am also the author of the Singing is Easy blog, where I write about singing, teaching and muscial expression, and Still Life With Paradox, which contains personal reflections on life, faith and morality.
My articlesMy siteAbout meMy books
Follow on:TwitterSeeking Alpha
Previous The Eurozone’s Long Depression
Next Why targeting productivity is a bad idea

U.S. Consumers Have Borne the Brunt of the Current Trade War