by
Frances Coppola
My articles My siteMy booksAbout me
Follow on:Twitter
Seeking Alpha
Summary:
The NI Fund discussed in this post covers England, Wales and Scotland only. Northern Ireland has a separate NI Fund, which is excluded from the figures given in this post. However, it works in exactly the same way as the Fund discussed here. Sometimes the government is its own worst enemy. HM Treasury's hamfisted response to this Freedom of Information request from Trudy Baddams of the pension rights campaign group "We Paid In, You Paid Out", has caused a very silly storm.Ms Baddams asked this question: Can you confirm that the National Insurance Fund (NIF) is presently in surplus and by how much? Can you also please confirm how much has been paid from the fund into the National Insurance Investment Fund in the last 10 years? In response, HM Treasury pointed her to the NIF accounts,

Frances Coppola writes The foolishness of the old

The inhumanity of Ofqual’s algorithm 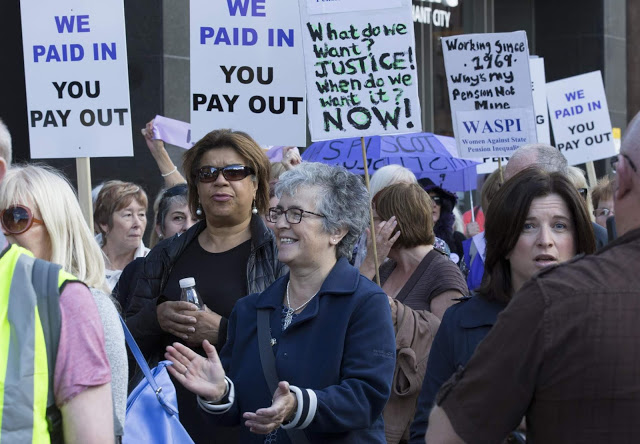 The NI Fund discussed in this post covers England, Wales and Scotland only. Northern Ireland has a separate NI Fund, which is excluded from the figures given in this post. However, it works in exactly the same way as the Fund discussed here.

Sometimes the government is its own worst enemy. HM Treasury's hamfisted response to this Freedom of Information request from Trudy Baddams of the pension rights campaign group "We Paid In, You Paid Out", has caused a very silly storm.

In response, HM Treasury pointed her to the NIF accounts, which are produced yearly. But then it added this paragraph (my emphasis):

This final statement (highlighted) was seized upon by opponents of women's state pension age rises as evidence that women born in the 1950s were being deprived of their pensions because of government mismanagement or even downright fraud. Since then, numerous articles, blogposts, tweets and Facebook posts have insisted, sometimes hysterically, that the NIF has been "plundered" by successive governments to "pay off the national debt", and that women were "robbed" of their pensions to plug the gap.

The independent fact checking organisation Full Fact attempted to debunk the claim that the NIF was being used to pay down the National Debt. But its conclusion unfortunately reiterated HM Treasury's confusing statement:

Claim: National Insurance Contributions are being used to reduce the national debt.

Conclusion: Some are. This doesn’t mean anyone isn’t getting paid what they’re currently due in pensions or benefits—the UK government invests the NICs that don’t go towards paying pensions and benefits on reducing the national debt.

Full Fact then muddied the waters still more by discussing the slightly incestuous relationship between the NIF and general taxation (of which more shortly) and the NIF's looming insolvency. This was to my mind unnecessary and only increased the confusion. Poor effort, Full Fact. Not up to your usual standard.

Before I dive into the misleading FOI response myself, let me first debunk two contradictory myths, both of which are widely believed (often, bizarrely, by the same people):

Both of these are untrue.

Firstly, the NIF is not, and never has been, a pension fund. It does not have "assets under management" belonging to contributors and invested for a future return. It is a clearing house which receives NI contributions (net of a 20% contribution to the NHS) and immediately disburses them to state pensioners and other beneficiaries. Thus the NI contributions of working people pay the pensions and benefits of people who are unable to work due to old age, sickness, unemployment or maternity: in their turn, when those who have previously paid NI become unable to work, their pensions and benefits are paid from the NI contributions of other people. NI contributions are not in any sense "savings". They are more correctly regarded as tax.

However, although they are tax, NI contributions do not go into the general "pot" of government funds. The NIF is ring-fenced for the payment of certain welfare benefits including the state pension. The full list of benefits paid from the NIF is here. Nothing else can legally be paid from it.

Despite repeated claims from campaigners that the NIF has been used to, inter alia, bail out banks, bribe Tory fat cats, finance wars, fund space programs in developing countries, provide housing for immigrants, give generous benefits to idle young people and pay off the national debt, there is zero evidence that the NIF has ever paid for anything other than the things it is legally required to fund. The accounts show that the single biggest item of expenditure from the NI Fund - by far - is the state pension, which swallows up almost all NI contributions, leaving virtually nothing for other benefits. If it were not for the rises in state pension age and the ending of SERPS/S2P in 2016, the NIF would now be insolvent.

That said, the amount of state pension and benefits paid out does not depend on NI receipts, but on Government policy as agreed by Parliament. The Government guarantees to maintain pensions and benefit payments at the agreed levels even if NI receipts fall. To ensure that as far as possible the NI Fund can meet its obligations without Government help, the NIF is legally obliged to keep reserves amounting to a minimum of 1/6 of outgoings. The "surplus" to which Trudy Baddams alludes in her FOI request is made up of these "statutory reserves" plus accumulated yearly excesses of receipts over income (if any).

Obviously, if outgoings exceed income - as they typically do in recessions - reserves fall. If the NIF's reserves fall below the statutory minimum, the Government tops them up from general taxation. Between 2014 and 2016, it provided a total of £14.2bn to the NIF to rebuild its reserves, which had been depleted by the deep recession of 2008-9, the slow recovery and a sharply rising number of pensioners due to longevity increases and baby boomer retirements. So, far from "raiding" the NIF, the Government actually bailed it out.

Since then, the NIF's finances have improved, though without the Government's bailout its reserves would still be below the statutory minimum. In the tax year ending 31st March 2019, the NIF's income exceeded its expenditure by £5.7bn, raising its total reserves from £24.2bn at the time of the FOI response to £29.3bn. And this brings me to that sentence in the FOI response.

The sentence is correct to say that the way these reserves are managed has the effect of reducing the national debt. But this does not mean that the reserves are being diverted to "pay down" the existing national debt. Rather, it means that their existence enables the government to borrow £29.3bn less than it otherwise would need.

This has not always been the case. Prior to 2007, the NIF's reserves were invested in existing gilt-edged securities (government debt), which is the safest and most liquid sterling investment available in the marketplace. This was rather like the Bank of England's QE: the NIF owned government debt, but the debt still existed. This meant that although the reserves were effectively borrowed by the government to fund other spending, the total stock of government debt did not reduce.

However, in 2007 the Government moved the NIF's reserves into an Investment Account at the Debt Management Office (DMO). The DMO is the Government's internal bank, responsible for issuing government debt, accepting tax receipts and other income, and managing the government's financial balances. The NIF's Investment Account is one of several accounts managed by the Commissioners for the Reduction of the National Debt (CNRD), which is part of the DMO.

The NIF's Investment Account is similar to an "instant access" bank savings account. The DMO pays interest on the account, which forms part of the NIF's income: in 2018-19, interest paid by the DMO on the investment account was £178.4m. The funds are "on demand" and can be withdrawn by the NIF at any time.

Like any other bank, the DMO uses deposits to fund its lending and spending. Doing so reduces its need to issue public debt. The NIF's reserves thus reduce the public sector borrowing requirement (PSBR). In this sense, they can be viewed as "reducing the national debt". But this does not mean the funds are being "diverted" to other purposes. They are simply being lent out for a return. As the House of Commons briefing paper on National Insurance contributions explains:

It is worth emphasizing that these funds are being held in this account on loan… there is no question of the Government being in a position to use this facility to extract money from the Fund as an extra source of revenue.

There have been various proposals to pay 1950s-born women some form of compensation for state pension age rises. Many of the proposals involve paying out some or all of the NIF's reserves. But those reserves are legally required as a buffer against short-term variations in income and outgoings. If they were paid out to 1950s-born women, they would have to be topped up from general taxation. Therefore, if the the NIF's reserves were used to pay compensation to 1950s women, public debt would rise.

Whether 1950s-born women should be compensated for their state pension age rises is a political question that I do not propose to address here, though my views on the subject are well known. But there is a desperate need for honesty about the cost. There is no solution to the WASPI problem that doesn't involve much higher public debt. The campaigners have to make the case for this being a price worth paying. I'm afraid the election result shows that so far, they have failed to make that case.

I’m Frances Coppola, writer, singer and twitterer extraordinaire. I am politically non-aligned and economically neutral (I do not regard myself as “belonging” to any particular school of economics). I do not give investment advice and I have no investments.Coppola Comment is my main blog. I am also the author of the Singing is Easy blog, where I write about singing, teaching and muscial expression, and Still Life With Paradox, which contains personal reflections on life, faith and morality.
My articlesMy siteMy booksAbout me
Follow on:TwitterSeeking Alpha
Previous The blind Federal Reserve
Next Much Ado About Nothing

For a public sector job guarantee