by
Frances Coppola
My articles My siteAbout meMy booksMy videos
Follow on:Twitter
Seeking Alpha
Summary:
In a broad-ranging discussion the other day about the path of political and economic policy over the last decade, I found myself returning again and again to events in 2014. Events that were apparently unrelated: Bulgaria's banking crisis, Moldova's banking fraud, the collapse of Banco Espirito Santo, the election of Syriza in Greece, the first Scottish independence referendum, UKIP's success in two Westminster by-elections as well as local and European elections. And in Ukraine, the Euromaidan revolt followed by Russia's annexation of Crimea and invasion of Donbas. "Why do all roads lead back to 2014?" I found myself asking. The financial and political eruptions of 2014 marked the start of a major shift in the global geopolitical landscape. But it was not clear where the faultline lay.

Chris Blattman writes If we elected more women would there be less war? Yes but not for the reasons you think 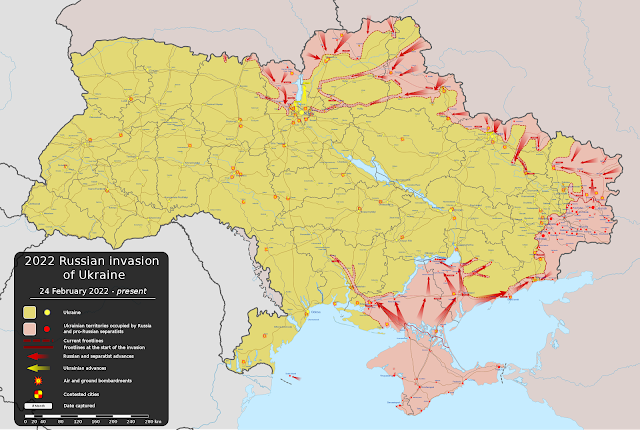 In a broad-ranging discussion the other day about the path of political and economic policy over the last decade, I found myself returning again and again to events in 2014. Events that were apparently unrelated: Bulgaria's banking crisis, Moldova's banking fraud, the collapse of Banco Espirito Santo, the election of Syriza in Greece, the first Scottish independence referendum, UKIP's success in two Westminster by-elections as well as local and European elections. And in Ukraine, the Euromaidan revolt followed by Russia's annexation of Crimea and invasion of Donbas. "Why do all roads lead back to 2014?" I found myself asking.

The financial and political eruptions of 2014 marked the start of a major shift in the global geopolitical landscape. But it was not clear where the faultline lay. Lots of people thought it was between the Western "old order" and the emergent economies of Asia, led by China. And others, including me, thought it was a revolt against the "neoliberal consensus" that had dominated both economics and public policy since the 1980s. Hardly anyone thought about what the strange reappearance of ghosts of the past to the east of the Danube might signify.

In September 2016, I wrote a long essay trying to make sense of the profound economic and political dislocations that had led to the UK's decision to leave the EU in June 2016. Trump had not yet been elected, but I was pretty sure he would be. I identified the proximate source of these dislocations as anger and rootlessness caused by the misguided austerity of the post-financial crisis years:

And I also traced their roots back to the deindustrialisation of the Reagan/Thatcher years and the soullessness of globalisation:

As Jesus observed, when you drive out a demon you must replace it with something wholesome, or a whole lot more demons will be along shortly to fill the hole it left. Globalism had failed, but nothing had replaced it except a vague, undefined longing for "a change", and a deepening nostalgia for a lost golden age. Something wicked was bound to be along shortly to fill the gaping hole created by the 2008 financial crisis.
By 2016, it was already obvious that the "something wicked" coming this way was nationalism of a kind last seen in the 1930s - the dangerous, toxic nationalism we thought had died in a Berlin bunker. And it could end in only one way:

President Putin has crossed this line. We are at war.

Carole Cadwallader argues that the West has been at war with Russia ever since Russia's invasion of Ukraine in 2014: 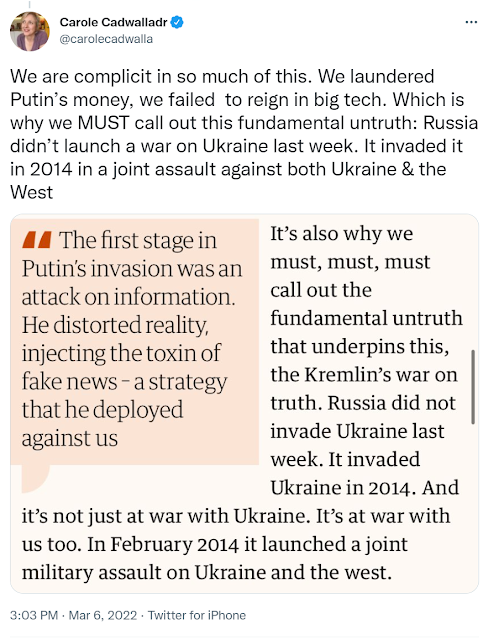 But this is not quite right. Russia launched a military assault on Ukraine, yes, but not on the West. What it launched against the West was a cyber version of biological warfare. Troll farms and pro-Russian websites spread waves of misinformation on on social media, poisoning people's minds against the social and political institutions that are the bedrock of a peaceful society, setting people against each other and destroying family and community ties. Even the Covid-19 pandemic was not immune.
The poison spread by Russian trolls on social media was of a particular type. As Umair Haque explains, it was the "blood and soil" nationalism of Putin's philosophers:

And it was spread in plain sight. Like many, I saw it, but I did not understand what I was seeing. I was overwhelmed by the tsunami of fake news and shell-shocked from constant battles with those promoting it - including at least one member of my own family, which I found deeply hurtful.
Umair also explains how Putin simultaneously undermined the West by pouring Russian money into Western economies, buying political power and weakening their resilience against resource shortages. The Western world has become critically dependent on Russian oil, gas and raw materials. Umair describes Russian money as a "Trojan horse", lulling the Western world into believing that Russia's intentions were essentially benign. Instead of "fearing the Russians that come bearing gifts", as Virgil might have put it, we welcomed them with open arms.
Whether Putin's interference in both the US's Presidential election and the UK's EU membership referendum can really be considered "war", as Umair argues, is a matter for debate. It is hard not to see Brexit as a Russian plot: both Leave campaigns were financed by Russian money, and weakening the EU by removing its largest military power and sowing hatred between Britain and its European neighbours was clearly to Putin's advantage. But many of those who voted for Brexit did so because of the anger and despair they felt about the failure of the globalist project to deliver the prosperity it had promised them. And in similar vein, although Russia's interference in the 2016 Presidential election is a documented fact, the vote for Trump was in large measure a result of the loss of dignity and hope felt by many Americans as they saw their jobs go to China and their economy swamped by Chinese imports. Russia may have opportunistically filled the hole left by globalism with demons, but those demons were born and nurtured in the West.
But although it's not clear exactly when this war started, there's no doubt now that we are at war. It is folly to imagine that because the West is refusing to intervene militarily in Ukraine, it is not at war with Russia. Ukraine is fighting Russia with MANPADs and Stinger missiles. The West is fighting Russia with a large and growing battery of financial and economic sanctions.
Sanctions are powerful weapons. As Norma Cohen explains (paywall), countries fighting hot wars need copious quantities of capital. Maintaining armed forces and their equipment in the field is extraordinarily expensive. So, cutting Russia off from sources of capital will slowly throttle its war effort. The longer Ukraine can hold out, the more difficult it will be for Putin to win this war.
However, powerful though fnancial and economic sanctions can be, they are slow-burning. If Ukraine is to hold out long enough for them to be effective, they must be complemented by real weapons. The military aid that the West is supplying to Ukraine is therefore every bit as important as the sanctions it is applying to Russia. Ukraine needs the best and most powerful weapons the West can supply and that its fighters have the skills to use. They are essential to Ukraine's resistance. We should see sanctions and military aid as complementary.
No war can be won without pain. The pain for Ukraine is already considerable: millions are fleeing their homes with little more than the clothes on their backs, often under fire from Russian forces. The civilian death toll is rising rapidly. And there is also growing pain for Russian civilians, especially those who oppose Putin's warmongering. Brutal repression is becoming common. But the test for the West will be whether it will tolerate the pain its own citizens must take for sanctions to be effective. There are already siren voices calling for the West to broker a negotiated settlement which would see Ukraine cede both territory and sovereignty to Russia. But if Ukraine surrenders - which this would be - what would then stop Putin moving on to other countries on his borders? Where does this end?
The conflict in Ukraine is about territory and control. But the deeper war between Russia and the West is about values. Alastair Campbell commented on the BBC's Politics Live programme today that the political faultline is not between left and right, but between democracy and dictatorship. How much do we in the West really value democracy? Will we fight for it against the "strongmen" of our time? And despite all our posturing and rhetoric, how much do we really value freedom and sovereignty? Will we defend the right of Eastern European states to elect their own politicians and choose their own alliances? Or will we sacrifice them to a dictator to preserve our own living standards?
The West sleepwalked into this war. It has been abruptly and painfully woken from its slumbers. And now all of us must decide on which side we will fight. Since this war is about values, not territory, neutrality is not possible.
I didn't know it then, but in 2014, I chose my side, when I publicly refused to support UKIP in the 2014 Rochester & Strood by-election which became the precursor to Brexit:

I still stand by the choice I made then. I stand for truth, openness, generosity and mutual dependence. And I stand with Ukraine, and with all those who fight for freedom and democracy.
Have you chosen your side?
Related reading:
Currency wars and the fall of empires
Sanctions against Russia contain a crucial exemption that lessens the pain - Marketwatch
Map of Russian incursions in to Ukraine by Viewsridge - Own work, derivate of Russo-Ukraine Conflict (2014-present).svg by Rr016Missile attacks source: BNO NewsTerritorial control source: ISW &amp; Template:Russo-Ukrainian War detailed map, CC BY-SA 4.0,
Ukraine war 2022-03-08
Frances Coppola
Full story here
Are you the author?
0 0

I’m Frances Coppola, writer, singer and twitterer extraordinaire. I am politically non-aligned and economically neutral (I do not regard myself as “belonging” to any particular school of economics). I do not give investment advice and I have no investments.Coppola Comment is my main blog. I am also the author of the Singing is Easy blog, where I write about singing, teaching and muscial expression, and Still Life With Paradox, which contains personal reflections on life, faith and morality.
My articlesMy siteAbout meMy books
Follow on:TwitterSeeking Alpha
Previous The SEC’s Bitcoin ETF Standoff
Next The Great Unemployment Fudge