by
Cullen Roche
My articles My siteMy booksMy videos
Follow on:TwitterLinkedIN
Seeking Alpha
Summary:
Here are some things I think I am thinking about: 1) Are target date funds “terrible”? Here’s Peter Mallouk, CEO of Creative Planning, on Twitter saying that target date funds are “terrible”: I asked him to elaborate: Peter’s a great follow if you use Twitter. Just a super practical thinker and all around good guy. And I think he’s touching on something important here. Personally, I am a huge fan of any investment strategy that I would categorize as a Discipline Based Investing approach. Discipline Based Investing is any asset allocation strategy that sets clear goals and establishes a systematic process for managing behavioral risk in a manner that helps achieve superior returns through superior behavior. I’d place target date funds in that category as they’re structured to achieve a

Here are some things I think I am thinking about:

I asked him to elaborate: 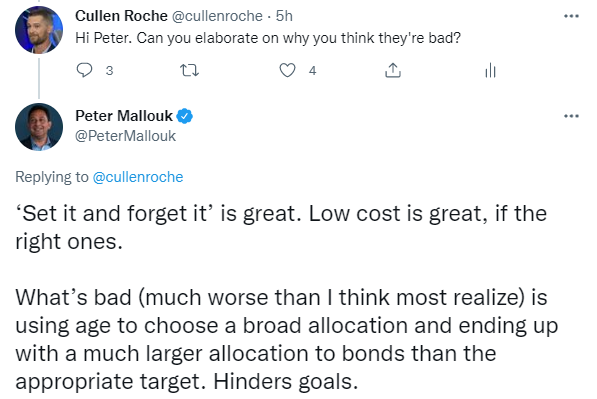 Peter’s a great follow if you use Twitter. Just a super practical thinker and all around good guy. And I think he’s touching on something important here. Personally, I am a huge fan of any investment strategy that I would categorize as a Discipline Based Investing approach. Discipline Based Investing is any asset allocation strategy that sets clear goals and establishes a systematic process for managing behavioral risk in a manner that helps achieve superior returns through superior behavior. I’d place target date funds in that category as they’re structured to achieve a specific goal and apply a simplified asset allocation that helps people remain disciplined over time. So, what’s the problem?

I think what Peter is alluding to is the idea of “age in bonds”, which, while simple and fine for most people, can be problematic in a broader sense. For instance, I’ve never understood why so many aggressive target date funds hold any bonds at all. Why does a 20 year old hold 20% of their portfolio in bonds? After all, the difference between a 80/20 portfolio and 100% stock portfolio is relatively minimal. The bonds are such a small slice of the portfolio that they don’t hedge the equity piece. And so they just end up dragging down performance over time without actually hedging anything. What is the point? You can have the same problem at the other end of the spectrum when people get older and end up holding way more bonds than they probably need….

This can be compounded by the homogeneity of the fund structure because you don’t actually have liquidity within the target date fund. In other words, your “hedge” is just sloppily mixed in with the riskier assets so it’s impossible to even take advantage of the liquidity in the portfolio if you needed to. Of course, you can satellite around the fund, but what’s the point of the bonds inside the fund if you need bond-like funds outside of the fund? But as structured, the 20% isn’t helping with behavior because it’s not a real hedge, it’s not providing liquidity and it’s dragging down returns. So, in a case like this a target date fund is actually pretty inefficient.

Anyhow, everyone is different and I am certainly not one to trash low fee diversified funds. But I think Peter’s point is that there are generally smarter ways to do this than the way SOME target date funds slap together a single fund that applies a generally appropriate, but specifically inefficient way of doing things that can actually be done more efficiently.

“So far, you’ve been lucky that there hasn’t been a financial crisis like 2008…Your record gives me grave concern. Over and over you’ve acted to make our banking system less safe. And that makes you a dangerous man.”

Now, don’t take this the wrong way. I don’t want to insult someone for sleeping because I really like sleeping and I wouldn’t fault them for sleeping a lot. But did Warren sleep through all of COVID? Did she sleep through the collapse in bond prices in March 2020? Did she sleep through the stock market collapse? Did she sleep through the unemployment rate jumping to 15%? That was a damn near repeat of 2008, but the Fed acted so swiftly and so broadly that markets snapped right back. There was zero economic contagion into the financial system. In fact, you could argue that the Fed did way more than they should have. You could argue that the Fed supported Wall Street and the economy so much that they’ve destabilized things in the other direction. So, no, I wouldn’t say that Powell was lucky at all. I’d actually say he’s been extremely unlucky in that he was put in an impossible position trying to predict the potential catastrophic outcomes of a once in a lifetime pandemic. And even though he arguably helped stabilize a lot of things he’s still getting screamed at by virtually everyone.

More specifically though, banks are operating far more prudently than they did before the GFC. In fact, if you’re someone who doesn’t have pristine credit it is extremely hard to get a loan. The overwhelming amount of lending that has been done in the last 10 years has been to the wealthy and well off. Maybe Powell doesn’t deserve the credit for this, but the idea that the financial system has become more fragile since 2008 doesn’t seem consistent with actual evidence.

And criticizing Powell purely on political grounds because he’s a Republican? This also seems unfair. He rebuked Trump almost every chance he could. He remained as steadfastly independent as he could despite enormous pressure from the Executive Branch.

So, I don’t really see how this criticism is warranted. Don’t get me wrong. I think there are things to critique here. But if anything Powell has been too involved in markets implementing exactly the type of discretionary policies that a Libertarian or staunch Republican would disapprove of.

To be honest, I think Warren is way out of line here. I have a lot of patience for this sort of grandstanding and I know it’s how they get their names in the press, but this is not justified in my opinion.

3) More Debt Ceiling Dangers. Someone asked me if I think the debt ceiling is having an impact on bond yields given the jump in recent days. I don’t know. I guess it could be. The simple fact of the matter is that the USA is not bankrupt and will not go bankrupt. I think the bond market knows this. We’ve seen this movie play out a bunch of times in the last 10 years and it always ends the same. The politicians do a bunch of grandstanding to get their names in the media, then they make some wasteful and meaningless side deals, raise the debt ceiling in exchange and then we do the whole thing again in a year. It’s all so painfully stupid.

So, what about the bonds? I think bond yields are moving a bit on inflation worries and the potential that the Fed is going to act sooner than expected. I don’t think this has much to do with the debt ceiling and everything to do with the risk of changing inflation expectations. I’ll be writing something more detailed there in the coming days that goes into more detail about the idea that inflation is “transitory” and all that. Stay tuned. 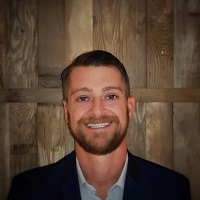