On Karl Polanyi and the labor theory of value

by
Matias Vernengo
My articles My siteMy booksMy videos
Follow on:TwitterLinkedIN
Summary:
The other great transformation I have discussed Polanyi on the blog before, but not in great detail (see this video posted a few years back from Fred Block for a more in depth discussion). However, writing about Bob Heilbroner's views of economics, and in particular the labor theory of value, reminded me why I have reservations about Polanyi, something that often surprises my friends, since I often cite some of his ideas, and I did put his book on the Top 10 list.Polanyi has been, indeed, one of the most influential social scientists of the 20th century, even if economists never read him. His notion that markets are embedded in society has been used by political scientists and sociologists to understand the rise of neoliberalism, and the policies of austerity that have had incredible

Matias Vernengo writes Beyond vulgar heterodox economics: a note on the legacy of Pierangelo Garegnani (1930-2011)

Matias Vernengo writes What is heterodox economics? Some clarifications 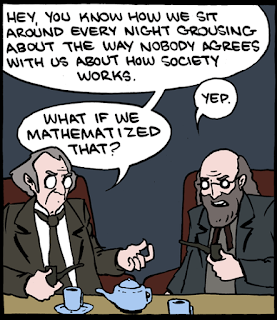 The other great transformation

I have discussed Polanyi on the blog before, but not in great detail (see this video posted a few years back from Fred Block for a more in depth discussion). However, writing about Bob Heilbroner's views of economics, and in particular the labor theory of value, reminded me why I have reservations about Polanyi, something that often surprises my friends, since I often cite some of his ideas, and I did put his book on the Top 10 list.

Polanyi has been, indeed, one of the most influential social scientists of the 20th century, even if economists never read him. His notion that markets are embedded in society has been used by political scientists and sociologists to understand the rise of neoliberalism, and the policies of austerity that have had incredible social costs (e.g. Mark Blyth's book Great Transformations). In part, the increasing formalization of economics made his work less popular among economists, proving that Boulding was right when he said that math brought rigor to economics, but it also brought rigor mortis.

The main thesis that free market capitalism leads to unstable political situations, and that this, in turn, would lead to coalitions that restraint and regulate markets, seems to have been vindicated, even if he did not get much recognition when the book was originally published. However, in spite of being a central an relevant author, many of his conclusions suffer from accepting an incorrect view of classical political economy, and ultimately his support for the mainstream (marginalist) theory of value.

He clearly believed, as did many, if not most, economists before the re-edition of Ricardo's works by Sraffa and his later rehabilitation of a version of the Labor Theory of Value (LTV), that classical authors were confused, and were essentially precursors of the neoclassical mainstream. He tells us:

"Apart from some special theories like that of rent, taxation, and foreign trade, where deep insights were gained, the theory consisted of the hopeless attempt to arrive at categorical conclusions about loosely defined terms purporting to explain the behavior of prices, the formation of incomes, the process of production, the influence of costs on prices, the level of profits, wages, and interest, most of which remained as obscure as before."

And there should be no doubt that to a great extent the mistakes of classical authors, in Polanyi's view, were associated with the LTV. He says just before the above passage that:

"Although Adam Smith had followed Locke’s false start on the labor origins of value, his sense of realism saved him from being consistent. Hence he had confused views on the elements of price, while justly insisting that no society can flourish, the members of which, in their great majority, are poor and miserable." [Italics added]

And it is also clear that he adhered to some vulgar version of the marginalist supply and demand story for value. Again in his words, from the his classic book, The Great Transformation:

"Economic value ensures the usefulness of the goods produced; it must exist prior to the decision to produce them; it is a seal set on the division of labor. Its source is human wants and scarcity." [Italics added]

In other words, relative value depends on demand (human wants) and their limited supply (scarcity). Given his background, and the mainstream authors he quotes, Polanyi basically believed in some version of marginalism, perhaps with Austrian undertones.

His bias in favor of neoclassical economics is also evident in his insistence that the beginning of capitalism* can be associated with the organization of the three markets that correspond to the factors of production, namely: labor, land and money (capital), and the implicit notion that the production is a linear process that goes from the factors to final output, in contrast with the classical view of a circular process, in which commodities where produced by means of commodities.

Polanyi was certainly sympathetic to Marx, but he clearly missed a lot, given the marginalist foundations of his analysis. He associated classical political economics with a naturalistic philosophy that tried to explain human behavior in terms of natural causes, and that imposed an extraneous logic to social relations. In view:

"naturalism haunted the science of man, and the reintegration of society into the human world became the persistently sought aim of the evolution of social thought. Marxian economics—in this line of argument—was an essentially unsuccessful attempt to achieve that aim, a failure due to Marx's too close adherence to Ricardo and the traditions of liberal economics."

So Marx wasn't a minor Ricardian, as Samuelson later famously put it (perhaps he was a major one for Polanyi), but his problem was the adherence to the Ricardian LTV.

I should note that Polanyi tends to think and judge classical and neoclassical economics from the point of view their economic policy prescriptions, and the idea of laissez faire, or what is referred to as liberalism in Europe. That is probably also the reason why Veblen coined the term neoclassical, which also gives the incorrect impression of continuity between both schools.

There is a lot that is valuable in Polanyi's analysis, but the problem is that he accepts the notion that prices are determined by supply and demand, and that implies that markets produce efficient outcomes in the marginalist sense of efficient allocation of resources (on the problems of the marginalist theory of value see this post on the capital debates). He does not seem to grasp that the classical notion of competition and long term equilibrium prices did not require optimality in the allocation of resources. Even if Polanyi is critical of the idea that in reality a pure market economy is stable, and even if he insists that free market policies led to a backlash from the losers that required a safety net to reduce the negative impact of market outcomes on society, it is still true that markets are about efficient allocation of resources in his view.

For classical political economists markets were an institutional framework for the reproduction of the material conditions of society, and for the process of accumulation. In the classical framework, equilibrium prices are not the ones that show the relative scarcity of goods and services on the basis of preferences, and limited resources. Normal (natural in Smith and Ricardo, production in Marx) prices are the ones needed to reproduce society. The overall state of preferences were taken as given, something determined by broad institutional and historical circumstances and not something to be formalized.

This matters exactly because the classical long term prices require that one distributive variable be determined beforehand. In other words, with real wages set at the subsistence level, something that was seen as historically and institutionally established in their time, the technical conditions of production (amounts of labor needed to produce, in the simplest version) were sufficient to determine normal prices. This view is actually perfectly compatible with Polanyi's notion of the embeddedness of markets, the idea that labor markets are social constructs and that rules, regulations and other institutional features are central for the creation of markets. In a sense, markets do not just appear out of thin air, in self-organizing fashion.

In other words, what Polanyi documents with this discussion of the expansion of the franchise in Britain in 1832, and the new Poor Laws established in 1834, is not the creation of the labor market as described by neoclassical theory (and that's exactly and incorrectly what he suggests). The institutional changes describe the full and final move from one set of regulations, still resulting from the more paternalistic system that came from pre-capitalist times, to a more punitive system for the working class. What was planned was not laissez faire in the labor market, but less protections to reduce the workers bargaining power. Workers resisted, but only much later, when their voice had a stronger political outlet (mostly with the rise of Labour), they could push back and regain some degree of bargaining power. Polanyi was partially correct, in saying that: "While laissez-faire economy was the product of deliberate State action, subsequent restrictions on laissez-faire started in a spontaneous way." However, it required taking over, to some degree, the State to bring about the Welfare State. Laissez-faire was planned, for sure, but planning was too.

Classical political economy actually allows one to understand that, since in the surplus approach there is no labor market that is regulated by supply and demand and determines both the real wage and the quantity of employment. Polanyi would have been under much stronger foundation if he understood the role of institutional and historical factors in classical political economy.** The reason that there was a backlash about laissez faire policies is that markets do not produce efficient allocation of resources, something Smith, Ricardo and Marx understood. Keynes' tried to explain why the neoclassical labor market theory was incorrect too. And here too Polanyi, writing just eight years after the publication of the General Theory, has nothing to say about it.

But as much as Polanyi neglected and misinterpreted the works of classical political economy, the same is true of heterodox groups that have brought back the ideas of the surplus approach. And heterodox economists should pay more attention to Polanyi's work and the idea of the embeddedness of markets on a broader social framework.

* To be precise he suggests approvingly that “the Reform Bill of 1832 and the Poor Law Amendment of 1834 were commonly regarded as the starting point of modern capitalism.” In other words, the labor market is at the center of his view of capitalism. Compare this with a Marxist discussion of modes of production that also puts labor relations at the center.

** Polanyi incorrectly suggests that Smith accepts the wage-fund doctrine, a precursor of supply and demand theories, which certainly was developed much later, with Stuart Mill, a transition author, that had already departed from Ricardian economics.

Econ Prof at @BucknellU Co-editor of ROKE & Co-Editor in Chief of the New Palgrave Dictionary of Economics
My articlesMy siteMy books
Follow on:TwitterLinkedIN
Previous The New School for Social Research at 100: A view from the Econ. Dept.
Next Forget the Natural Rate, says the Head of the Minneapolis Fed

Shang-Jin Wei — Why the US and China See Negotiations Differently