by
Frances Coppola
My articles My siteMy booksAbout me
Follow on:Twitter
Seeking Alpha
Summary:
Yield curves have gone mad. Negative yields are everywhere, from AAA-rated government bonds to corporate junk. Most developed countries have inverted yield curves, and a fair few developing countries do too:(chart from worldgovernmentbonds.com)Negative yields and widespread yield curve inversion, particularly though not exclusively on safe assets. To (mis)quote a famous pink blog, this is nuts, but everyone is pretending there will be no crash.Here, for your enjoyment, is an à la carte selection of the most lunatic government yield curves. You can find lots more here.Exhibit 1: Switzerland. Negative yield already extends beyond 30 years, and markets are pricing in further interest rate cuts and/or QE, or indeed anything to stop the Swiss franc appreciating as scared investors pile into


Nick Falvo writes Homelessness in canada could rise due to recession

Trade, saving and an economic disaster

Yield curves have gone mad. Negative yields are everywhere, from AAA-rated government bonds to corporate junk. Most developed countries have inverted yield curves, and a fair few developing countries do too: 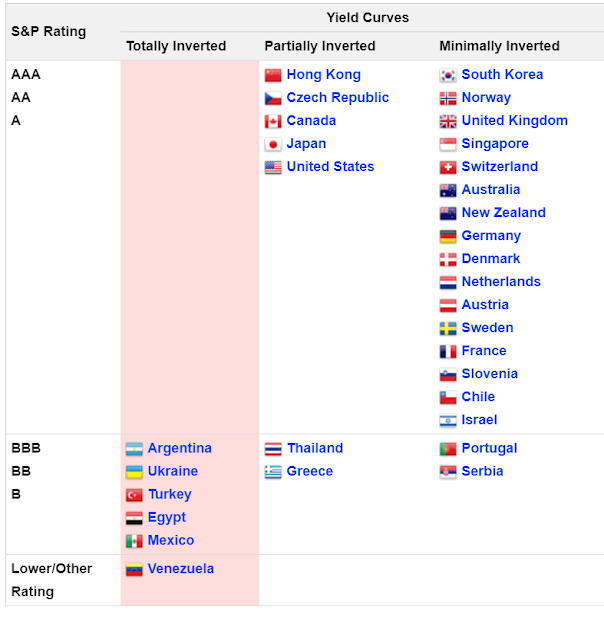 Negative yields and widespread yield curve inversion, particularly though not exclusively on safe assets. To (mis)quote a famous pink blog, this is nuts, but everyone is pretending there will be no crash.

Here, for your enjoyment, is an à la carte selection of the most lunatic government yield curves. You can find lots more here.

Negative yield already extends beyond 30 years, and markets are pricing in further interest rate cuts and/or QE, or indeed anything to stop the Swiss franc appreciating as scared investors pile into CHF-denominated assets. Hence the curve inversion. Every Danish government bond currently circulating in the market is trading at a negative yield. And the inverted curve tells us that markets are pricing in further interest rate cuts, most likely to hold the ERM II peg when the ECB cuts rates and re-starts QE. (Yes, it's when, not if  - see Exhibit 3) 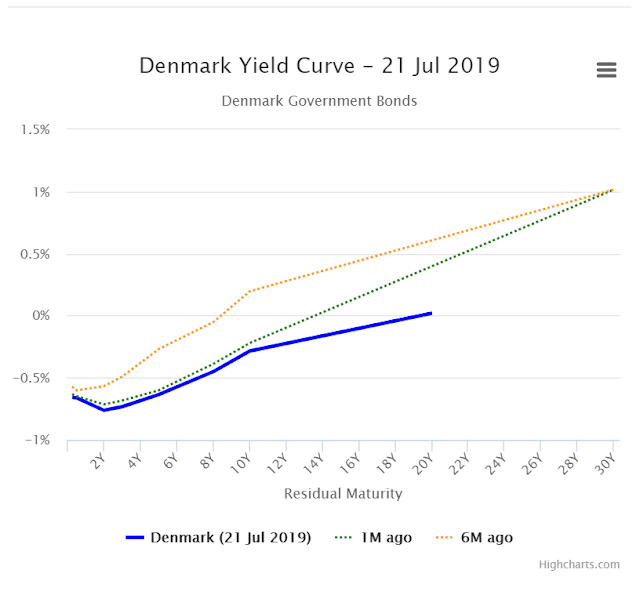 Eurozone aggregated government yield curves as at 18th July 2019 (chart from the ECB): 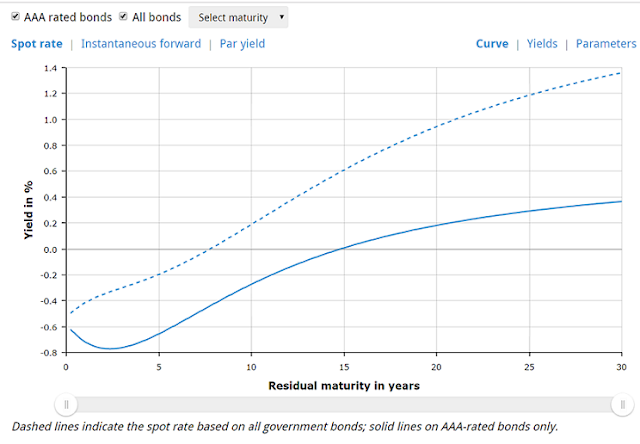 The solid curve shows us that investors will pay Eurozone goverments with triple-A ratings to borrow for 15 years or more. Here is the Netherlands, for example: 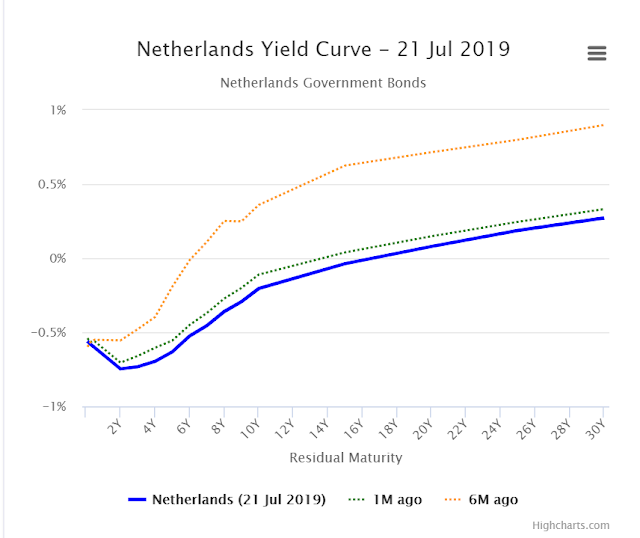 So far, so weird. The dashed curve shows us that investors will even pay Eurozone governments with much lower ratings to borrow for a few years. Here is Portugal's yield curve: 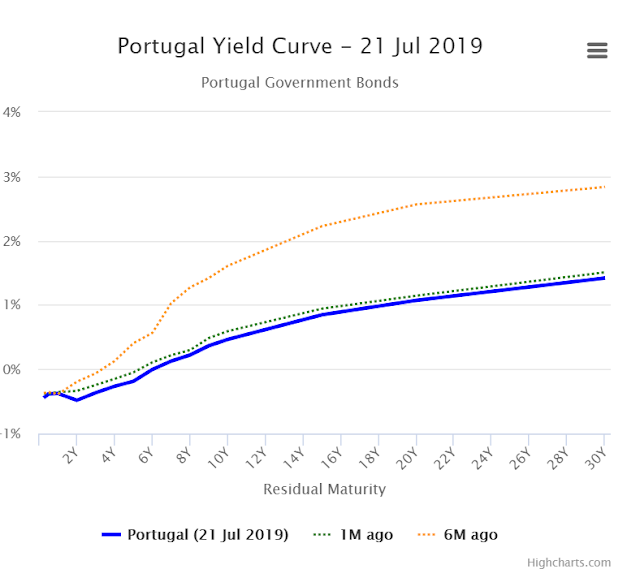 Admittedly, the yield is depressed by ECB QE, but it is still ridiculously low for a triple-B rated sovereign.

Even more weirdly, Greek bonds are trading at only 1-3%: 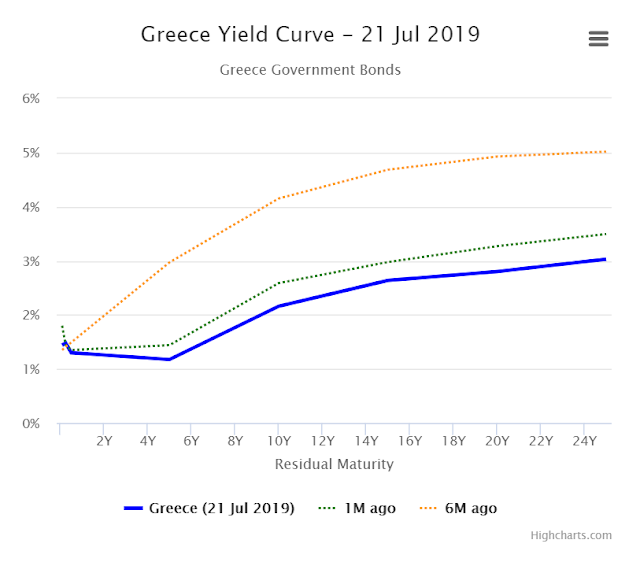 Greece, you may recall, defaulted on its debt to the IMF in 2015 and on its private sector debt in 2012. And Greece wasn't even included in the ECB's QE programme. This is totally nuts.

Returning to the Eurozone aggregate curves, the 0.5% negative yield at the short end of the "all bonds" curve suggests that markets expect the ECB to cut the deposit rate further into negative territory. And the fact that the AAA curve is inverted, but the "all bonds" curve is not, is in my view a clear indication that markets expect the ECB to re-start QE. Though why on earth the ECB should help Germany and the Netherlands to borrow at negative rates is beyond me. There is no evidence that these countries would use that opportunity to borrow more to invest. Appeals from central bankers and the IMF for them to relax their unhelpful fiscal tightness are falling on deaf political ears. They are determinedly running fiscal surpluses and reducing debt issuance at all maturities. All ECB QE would do is help them reduce their debt even more quickly. This is not remotely productive.

Admittedly, ECB QE does reduce yields on periphery bonds, which helps make the debt of countries like Portugal more affordable. But Portugal can already borrow at negative rates for five years. What on earth would be the point of depressing its yields even more?

What is really needed is for the Eurozone to end its over-restrictive deficit/GDP and debt/GDP limits, which force governments to undertake pro-cyclical fiscal consolidation and sacrifice much-needed investment. Alternatively - or better, simultaneously - create a Eurozone-wide "safe asset" that can be sold to investors, and use the proceeds to pay for the investment that governments cannot or will not undertake. But we seem a very long way away from either of these at the moment.

If expansionary fiscal policy continues to be notably absent in the Eurozone, could the ECB do anything to relieve the drought other than rate cuts and bond purchases? Of course it could. It could buy corporate bonds and equities - though it is unclear why the ECB should subsidise European corporations, if Eurozone governments can't. Alternatively, it could transfer money equally to households all over the Eurozone, which in my view is a much better idea. But we seem a very long way away from anyone at the ECB seriously considering helicopter money. Apparently they would rather experiment with wholly untried negative rates and even more distortionary QE than give people money. Some unconventional monetary tools are much more equal than others.

Yeah, I know, Brexit. Actually I think this is the only reason the yield curve is above zero despite its short-end inversion. If it weren't for Brexit, the UK would be sliding into negativity like the rest of Europe. Brexit raises sovereign risk and hence gilt yields. I am not sure this is anything to be proud of. I also don't think the inversion has much to do with Brexit. It seems of a piece with the general trend in developed countries. 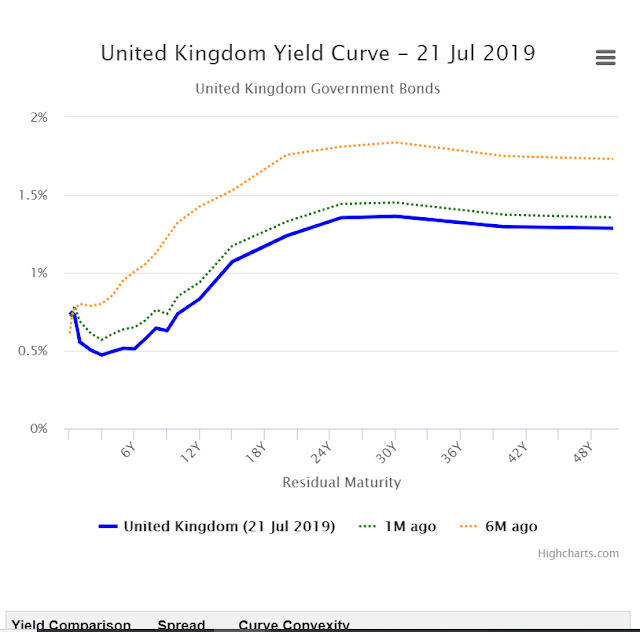 Gone are the days when Japan was the poster child for yield curve weirdness. This looks almost normal compared to European curves: 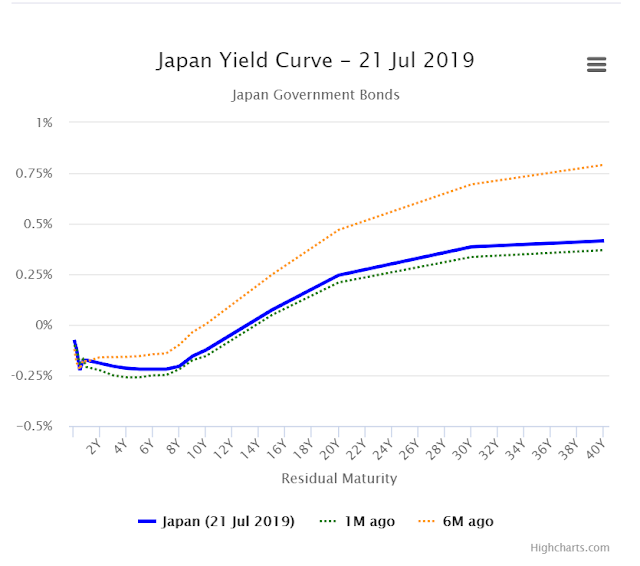 But Japan is now the poster child for Yield Curve Control. Hence the flat yield curve. It's a feature, not a bug. The slight inversion suggests that more monetary easing is on its way. No-one seems that bothered, frankly. Japan is....negative. Everyone knows that. It's normal. 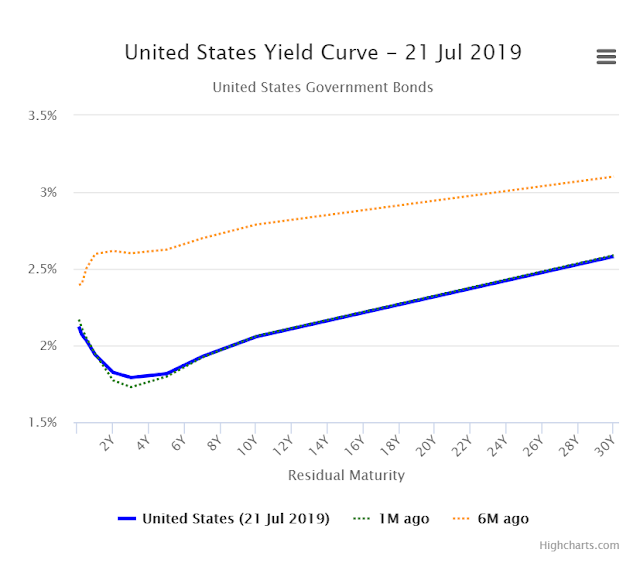 Am I the only person who thinks it is completely insane that the 10-year US Treasury yields the same as the 10-year Greek government bond?

Anyway, just look at that inversion. The Fed is way out of line with other central banks. The dollar is soaring and the President is cross. Surely the Fed will cut rates any day now.

And now we move on to the real weirdness. 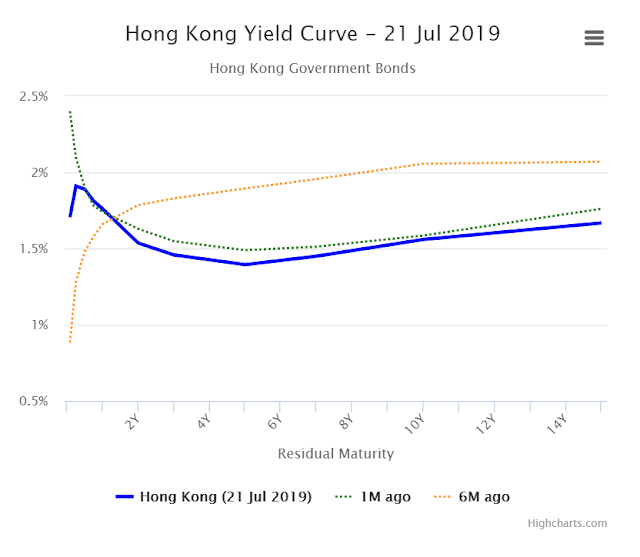 Well, the short-end spike could indicate a liquidity shortfall due to a short squeeze, I suppose. But even without that, the yield curve is predicting lower rates well into the future. Global trading gloom, perhaps. Or uncertainty about Hong Kong's future?

And finally.....to everyone's relief, yield curves are behaving completely normally for some countries: But Western markets have now become the negative-carry universe that some of us predicted years ago. And the yield curve inversions go hand-in-hand with this. We do not fully understand how negative rates work, but I have long thought that once fully negative yield curves become "normal", so too will yield curve inversions. Those who want to adopt negative-rate policy as a monetary stimulus tend to assume that people will behave in the same way when rates are negative as they do when they are positive. But if, as I think, negative rates create a distorted mirror image of our familiar positive-rate world, I would expect that people's response to them would similarly be a distorted mirror image of their present behaviour. If so, then the longer negative yields persist, the more inverted yield curves will become.

Does this necessarily mean there will be a recession? Possibly. We are not yet sufficiently deep into negative rates for yield curve inversion to be "normal". But eventually, if we continue on our present trajectory, a positive-sloping yield curve will become the recession warning for most Western countries. By then, the weird transformation of our financial system that is already under way will be largely complete. No doubt this will be music to the ears of those who hate banks, but I remain unconvinced that it would be any better for undergoing such a sea-change. It could conceivably be a lot worse. Be careful what you wish for.

I’m Frances Coppola, writer, singer and twitterer extraordinaire. I am politically non-aligned and economically neutral (I do not regard myself as “belonging” to any particular school of economics). I do not give investment advice and I have no investments.Coppola Comment is my main blog. I am also the author of the Singing is Easy blog, where I write about singing, teaching and muscial expression, and Still Life With Paradox, which contains personal reflections on life, faith and morality.
My articlesMy siteMy booksAbout me
Follow on:TwitterSeeking Alpha
Previous The Case for People’s Quantitative Easing
Next The Broken Contract