by
Frances Coppola
My articles My siteAbout meMy booksMy videos
Follow on:Twitter
Seeking Alpha
Summary:
Earlier today, the Governor of the Bank of England, Andrew Bailey, gave a speech at the Resolution Foundation outlining the nature of the Covid-19 crisis and the challenge that it poses for monetary policy. But as his speech progressed, it became clear that the Bank faces a much larger challenge. Covid-19 hit the UK economy at the end of a dismal decade. Returning to "where we were" before the pandemic won't be good enough. Just how dismal the 2010s were is evident in this chart from Andrew Sentance: Even before Covid-19 struck, average GDP growth was well below its historical average and heading downwards. The 2010s were, to put it bluntly, a decade of stagnation.  The 2000s were slightly worse, but that was because they included the deep recession after the financial crisis, during


T. Sabri Öncü writes To Loot or Not to Loot? How Public-Private Partnerships Harmed Turkey

NewDealdemocrat writes First comments on Q2 GDP, no Recession Yet

NewDealdemocrat writes Coronavirus dashboard for July 27: likely at or past the BA.4&5 peak

The ones who stay in Omelas

Earlier today, the Governor of the Bank of England, Andrew Bailey, gave a speech at the Resolution Foundation outlining the nature of the Covid-19 crisis and the challenge that it poses for monetary policy. But as his speech progressed, it became clear that the Bank faces a much larger challenge. Covid-19 hit the UK economy at the end of a dismal decade. Returning to "where we were" before the pandemic won't be good enough.

Just how dismal the 2010s were is evident in this chart from Andrew Sentance: 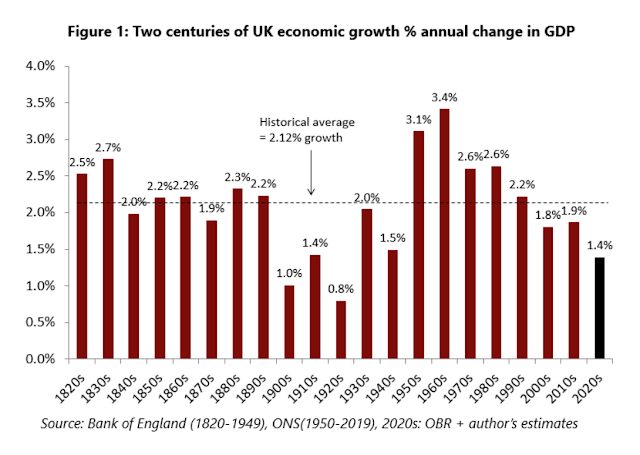 Even before Covid-19 struck, average GDP growth was well below its historical average and heading downwards. The 2010s were, to put it bluntly, a decade of stagnation.  The 2000s were slightly worse, but that was because they included the deep recession after the financial crisis, during which the economy shrank by 6%. For the 2010s, there was no such excuse.
So Covid-19 hit an already under-performing economy. As a result, Sentance's forecast for the 2020s is frankly terrible. Not since the 1920s has economic growth been so low. But of course, this is a forecast. The challenge facing the Bank of England is to ensure that it does not come to pass.
But why was economic growth in the 2010s so underwhelming? This chart from Bailey's speech shows the behaviour of GDP growth rates in the last two decades: 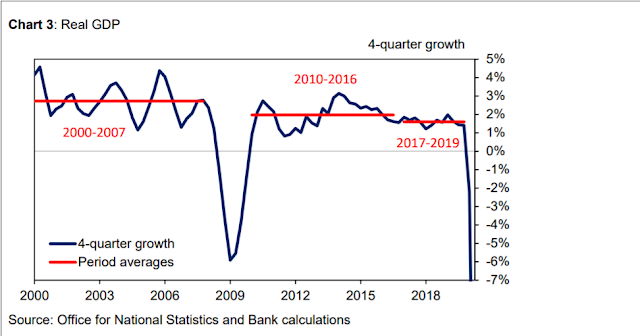 There's quite a lot of noise in the figures, particularly prior to the financial crisis, so the Bank of England has helpfully added lines showing average RGDP growth for three key periods: 2000-2007, 2010-2016, and 2017-19. It is evident that the average in each period is lower than in the one before. The growth rate appears to be trending downwards.

But let's look through those lines and see what the chart itself tells us. Firstly, and obviously, GDP growth was on average stronger before the financial crisis than afterwards. And it was also considerably more volatile. We don't know why, but one factor might be the light regulation of the financial sector at that time. Bank lending is known to be pro-cyclical, so variations in banks' appetite for risk might be expected to cause swings in the GDP growth rate. Since the financial crisis, the financial sector has been much more tightly regulated. This dampens the procyclicality of bank lending, so might reduce the volatility of GDP growth. But does it also dampen the average GDP growth rate?

Secondly, the post-financial crisis recovery tailed off quickly and GDP growth slumped to less than 1% in 2011-12. Was this solely because of the impact of the Eurozone crisis, or did the front-loaded austerity of the Coalition government play a part? In my view, an under-appreciated factor is the tax increases on energy in 2010-11, which combined with a sharp rise in oil prices to cause energy price rises of 20% or more for households and businesses.

The economy recovered to a post-crisis high by 2014. But then growth tailed off again. What caused this? And why has the GDP growth rate been pretty much stuck at a measly 1.5% since 2016?

Much of Bailey's speech is devoted to the economic reasons for this long slump. The political issues understandably didn't get an explicit mention, but they were there under the surface, and the French economist Helene Rey didn't hesitate to spell them out in her response. It is not just the Covid-19 crisis from which the UK economy must recover. And although the financial crisis threw a long shadow, it was not responsible for the GDP growth rate flatlining in 2017-19. That was caused by Brexit.

It has become taboo to say, or even imply, that the Brexit vote of 2016 was in any way negative for the UK economy. If the Bank of England governor had dared to say openly that the primary reason for four years of stagnation prior to the Covid-19 shock was investment collapse due to Brexit, he would have been accused of making political statements. But it is the truth.

Here's the evidence from Bailey's speech: 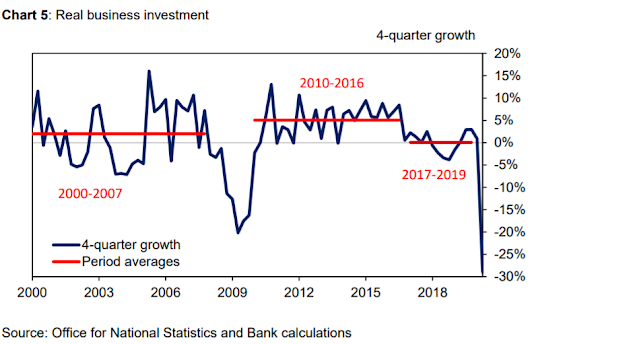 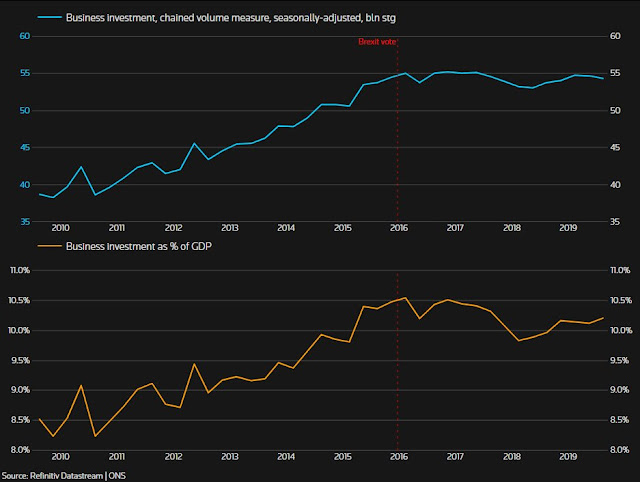 The final chart in Bailey's speech graphically illustrates just how damaging the Brexit vote was. Bailey describes it thus:

The effect of this weakness in investment can also be seen by looking at capital services – a measure of the value of the flow of services which are derived from the capital stock, including machinery, equipment, software, structures, and land improvements. This may better capture the drivers of supply growth than looking at growth in investment alone. It shows a sharp decline following the collapse in investment during the global financial crisis, and a subsequent recovery, which flattened off as a result of the weak investment in the period prior to Covid.

The chart actually shows that the recovery in capital services growth was partially reversed by the Brexit vote. But I guess that is too "political" for the Governor of the Bank of England to say openly. 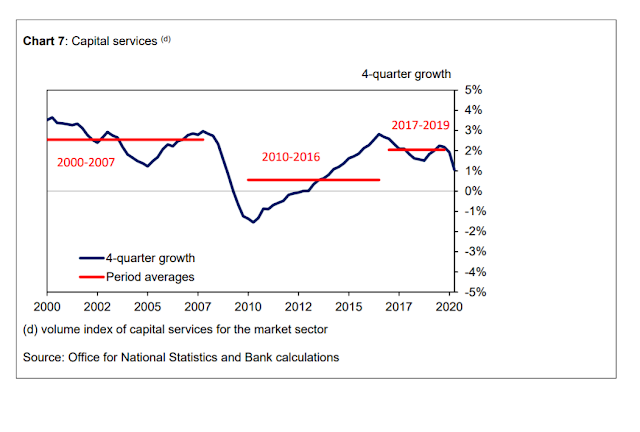 Britain left the EU on 31st January 2020, just before the pandemic hit. On 31st December 2020, the transition period during which Britain effectively still remained part of the single market and customs union ended. This coincided with the third and most serious wave of the virus and a strict lockdown. We don't yet have GDP or investment figures for the first quarter of 2021, but it seems likely that the UK is in recession and investment has crashed. The Government seems to want to blame everything on the pandemic, but it's clear that Brexit had caused GDP growth to slow even before it was complete, and the disruption caused by the imposition of regulations from January 2021 is bound to have made matters worse. The recession is therefore probably deeper than it would have been without Brexit, and as Brexit is a permanent change, there will be lasting scarring.
Inadequate business investment isn't the sole cause of poor GDP growth. Indeed, the Bank of England's chart shows that business investment was noticeably stronger in the post-crisis period up until the Brexit shock than it was before the financial crisis, and yet growth was significantly lower. But during that time, government investment was slashed to zero in a vain attempt to balance the budget: 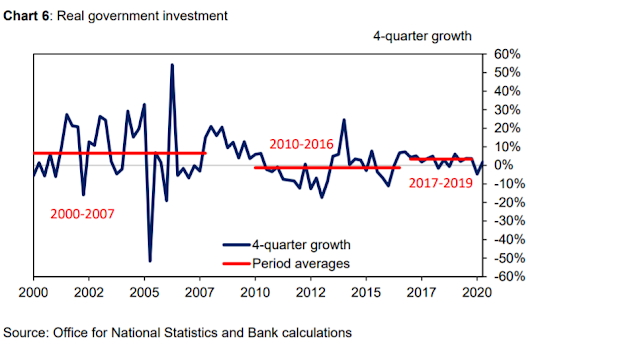 Thus, although real business investment increased, total investment fell. This was in addition to the aforementioned tax rises, and the damaging cuts to public spending about which I have written many times. The weakened UK economy lost the fiscal support that would have helped it to recover. Even though government investment picked up somewhat between 2017-19, it was not enough to offset the failure of business investment after the Brexit vote. Ten years of slump can be firmly laid at the door of successive UK governments.
The story of the dismal decade is one of repeated economic shocks, mostly self-inflicted, which trashed investment and derailed recovery. Now, the combination of the Covid crisis with the Brexit shock, plus the lasting legacy of the misguided austerity imposed on a weakened economy after the financial crisis, threatens to turn the 2020s into the decade from hell.
But it doesn't have to be like this. The connection between investment and economic recovery is firmly established. And there is no time to wait for private sector confidence to return, particularly as Brexit is already a much longer-lasting shock to business investment than Covid and there is no reason to suppose that things will improve any time soon. When the private sector can't or won't invest, the public sector must do so. We need big government investment, not only to pull the economy out of the Covid recession, but to end a decade-long and wholly unnecessary slump.
The Governor still seems to think that kickstarting recovery is the Bank of England's responsibility. But the Bank of England doesn't do investment. That's the job of government. Government failed in its duty after the financial crisis. It is imperative that it does not do so again. If we are ever to get out of this dismal swamp, the Bank must step back, and government must turn on the investment taps.
Related reading:
Happy days are here again
Austerity and the rise of populism
Low growth is the "New Normal" for the UK and other Western economies - Andrew Sentance
Getting over Covid - Andrew Bailey, Bank of England

Image: The Slough of Despond from Pilgrim's Progress by John Bunyan.

I’m Frances Coppola, writer, singer and twitterer extraordinaire. I am politically non-aligned and economically neutral (I do not regard myself as “belonging” to any particular school of economics). I do not give investment advice and I have no investments.Coppola Comment is my main blog. I am also the author of the Singing is Easy blog, where I write about singing, teaching and muscial expression, and Still Life With Paradox, which contains personal reflections on life, faith and morality.
My articlesMy siteAbout meMy books
Follow on:TwitterSeeking Alpha
Previous Democracy won’t save you
Next From Carbon To Metals: the Renewable Energy Transition