Dissecting the Eurozone’s (lack of) inflation

by
Frances Coppola
My articles My siteMy booksAbout me
Follow on:Twitter
Seeking Alpha
Summary:
Eurozone inflation is in the doldrums again. After perking up to 1.7% in April, it slumped back to 1.2% in May. According to Bloomberg, this was "lower than expected". But I wonder who, apart from the ECB, really expected anything else. Core inflation has been well below target for the last five years: (chart from Bloomberg)And although the headine HICP measure increased in 2016-18, this was mostly due to the oil price bouncing back from its 2014-15 slump: (chart from Macrotrends)The wild swings in the energy inflation rate can be clearly seen on this chart from Eurostat: It's perhaps not obvious at this resolution, but the movement in headline HICP is almost entirely due to the energy price.In fact comparing the inflation and oil price charts, it is hard to see much justification 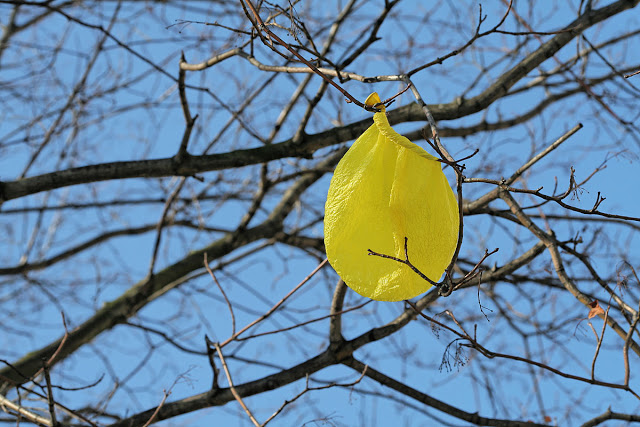 Eurozone inflation is in the doldrums again. After perking up to 1.7% in April, it slumped back to 1.2% in May. According to Bloomberg, this was "lower than expected". But I wonder who, apart from the ECB, really expected anything else. Core inflation has been well below target for the last five years: 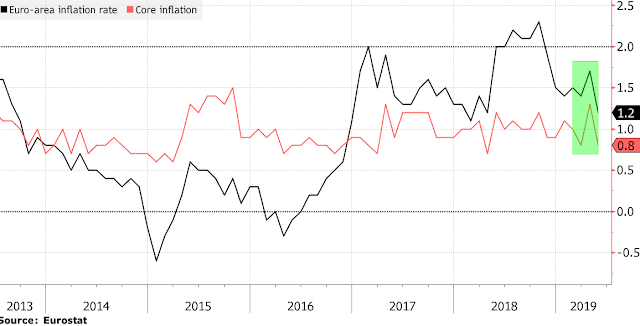 And although the headine HICP measure increased in 2016-18, this was mostly due to the oil price bouncing back from its 2014-15 slump: 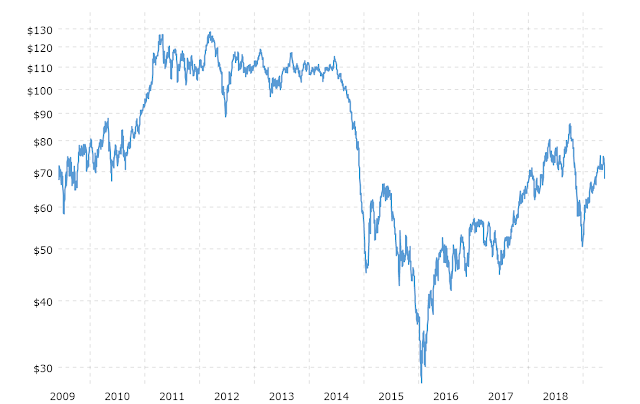 The wild swings in the energy inflation rate can be clearly seen on this chart from Eurostat:

It's perhaps not obvious at this resolution, but the movement in headline HICP is almost entirely due to the energy price.

In fact comparing the inflation and oil price charts, it is hard to see much justification for the ECB's claim that it started QE in March 2015 because inflation expectations were becoming "unanchored". Headline HICP briefly dipped below zero in January 2015 because of a temporary external shock. There was no reason to suppose this would result in general deflation. And the core inflation measure, which excludes oil, was roughly where it had been since 2013.

And it doesn't seem that QE had much effect on inflation, either. Whatever the ECB may think, it was principally oil prices, not QE, that lifted headline HICP to 2%. Now the oil price is on its way down again: 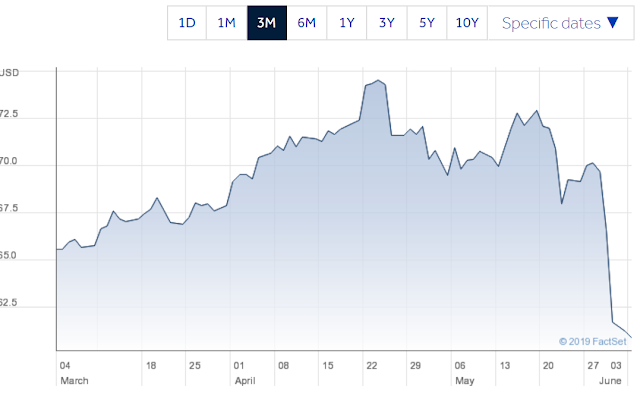 Unsurprisingly, so is HICP. Meanwhile, core inflation - a better measure of the effectiveness of ECB monetary policy - has stayed stuck at around 1%. On this basis, it is hard not to conclude firstly that QE was ended prematurely, and secondly that the design of the ECB's QE programme left a lot to be desired. What on earth is the point of subsidising rich Eurozone governments to the tune of €billions if it doesn't bring core inflation up to target?

All measures of  inflation are remaining lower than expected for much longer than expected. I've previously discussed the disinflationary bias in ECB policy-making. Sadly, it doesn't seem that this is changing any time soon.

The ECB's favourite indicator of inflation expectations, the 5 year 5 year inflation-linked swap rate, has been trending downwards since late 2018 and has now slumped to 1.32, close to the level at which the ECB previously decided expectations were becoming "unanchored". Yet the ECB has done virtually nothing except repeat "monetary policy remains accommodative". Unsurprisingly, inflation is also falling. In response, the ECB has simply cut its inflation forecasts and muttered about "standing ready" to do something "when conditions dictate". It's amazing how unconcerned the ECB can be about its price stability mandate when inflation is below target, as it mostly is.

At its last meeting, the ECB repeated its "longer for lower" forward interest rate guidance, announced a new round of TLTROs (cheap loans to banks) starting in September, and floated the idea of tiered interest rates to protect banks from the profit-eating effects of negative interest rates. This was never going to be an adequate set of responses to an evident disinflationary trend. Unsurprisingly, markets were unimpressed. They want a bazooka, and they want it now.

To be sure, inflation expectations are something of a self-fulfilling prophecy: if people expect inflation to fall, it will fall. There might be an argument that doing nothing except reiterating the adequacy of existing policy settings stops the bears from feeding. But the 5 year 5 year curve is not the only indicator that economic conditions in the Eurozone are worsening.

The April edition of the ECB's Monetary Developments in the Eurozone bulletin contains some worrying statistics. Here's the growth rate of monetary aggregates M1 and M3: 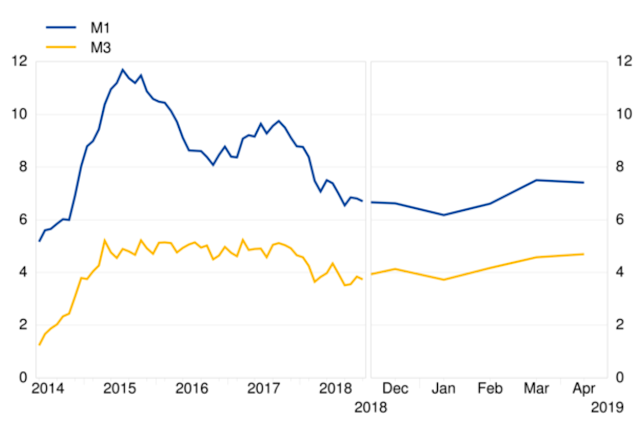 The very high M1 growth rate between 2015 and 2017 is due to QE, and it inevitably tailed off when purchases ended in 2018. However, it is now beginning to tail off again after rising in the early part of this year. This suggests weaker bank lending, though this is not (yet) reflected in the ECB's adjusted lending figures.

Looking at M3 (broad money), it is evident that QE withdrawal was premature. Withdrawing QE should not cause M3 growth to drop significantly. If it does, it means that the economy is still operating below potential. The chart shows that M3 growth slowed significantly when the ECB started to taper off purchases.

The M3 growth rate has improved this year, but I fear this will not last. M3 growth lags M3 lending, and the growth rate of M3 lending (including securities and commercial paper) is already slowing. The ECB's commentary says that the growth rate of total credit to both the private and sectors has fallen. The figures in the annex show that this is driven mainly by a significant fall in the rate of debt security issuance by both the private and public sectors. As the M3 lending growth rate is a reasonably reliable measure of general economic activity, this does not bode well for the Eurozone economy.

Looking at the components of M3 reveals another vulnerability. This chart shows that growth in government borrowing has slowed to a crawl: 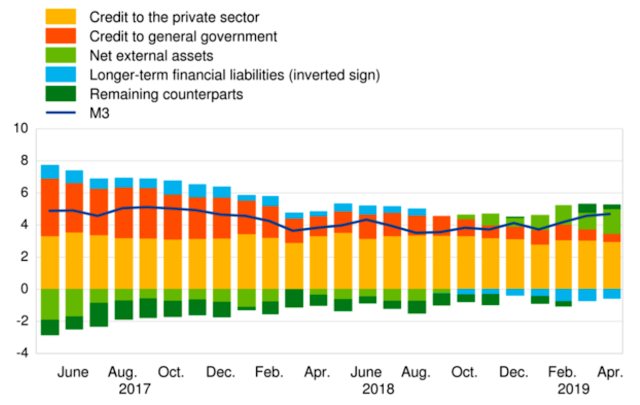 But offsetting this is an increase in net external financial assets. Meanwhile, domestic private credit growth is flat. Increasingly, Eurozone residents are investing outside the Eurozone. The Eurozone has become a net lender to the rest of the world.

This wouldn't matter if the outlook was bright in the rest of the world. But the Eurozone's export-led growth is threatened by a global trade slowdown in part driven by the Trump administration's aggressive stance on trade balances. IHS Markit's manufacturing PMI survey shows that the important German manufacturing sector is contracting at its fastest rate since 2012: 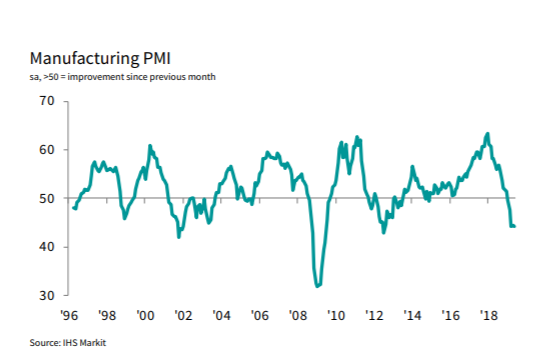 Employment in the sector is falling sharply, and the German economy is forecast to grow at only 0.5% this year. For the Eurozone as a whole, which relies heavily on strong German growth to offset weak economic performances elsewhere, this is yet another signal of a forthcoming downturn.

This poses a considerable problem for the ECB.  Instead of investment going into the domestic private sector, it is leaving the Eurozone, driven away by an over-tight fiscal stance in core countries and continuing debt-driven austerity in many periphery countries. The bloc really needs fiscal stimulus: to be fair, ECB politicians have been pretty explicit about the need for fiscal easing and government investment, especially in core countries. But all the indications are that fiscal policy will, if anything, tighten further. Germany has shown little interest in abandoning its prized "schwarze null" and reducing its enormous trade surplus. The "debt brake" beloved of German politicians is proliferating across the Eurozone. And Brussels is preparing to impose sanctions on Italy for breaking fiscal rules. Meanwhile, investors are already paying Germany to borrow for 10 years or more. Under these circumstances, more QE would be terrible policy. All it would do is reward Germany for the miserliness that is driving the Eurozone economy into the ground.

But QE is not the only policy available to central banks. A genuinely independent ECB could, and should, distribute money directly to households and small businesses. It could, and should, come up with ways of supporting banks to provide credit to productive businesses. It should do all of this, and more, even if some of its shareholders object. That it does not do so arises from its own culture, the willingness to tolerate high unemployment and poor economic performance because of irrational fears about inflation.

The ECB has never in the whole of its history pursued policies that promoted the prosperity of Eurozone citizens. It is time that its mandate was changed to make this its priority. And its new President must be someone who will put aside irrational fears and do "whatever it takes" to end the twin scourges of unemployment and poverty in Eurozone countries.

I’m Frances Coppola, writer, singer and twitterer extraordinaire. I am politically non-aligned and economically neutral (I do not regard myself as “belonging” to any particular school of economics). I do not give investment advice and I have no investments.Coppola Comment is my main blog. I am also the author of the Singing is Easy blog, where I write about singing, teaching and muscial expression, and Still Life With Paradox, which contains personal reflections on life, faith and morality.
My articlesMy siteMy booksAbout me
Follow on:TwitterSeeking Alpha
Previous The Abominable Laffer Curve
Next European banks and the global banking glut

Andrei Martyanov — On The Virtues Of Modelling