EU and UK economic prospects post-Brexit – the impact of investment

by
John Weeks
My articles My books
Follow on:Twitter
Summary:
Analytical Considerations As Brexit is finalized we find considerable speculation about the likely consequences for the UK and EU economies after the end of January.  Because this event has no clear precedent, much of the speculation derives from political predilections and opinion without an analytical anchor.  Since private investment plays a major role in both growth and diversification of economies, beginning with the motivation to invest might provide that anchor. As Keynes argued, private investment has both a long run underlying technical link to production while driven by the expectations of capitalists (Keynes 1936, Chapter 12).  In the long term, the economy’s investment share adjusts to the technical requirements of production, the amount of capital input needed

Who Pays the Corporate Income Tax? Don’t believe the IFS

Dealing with the overhang of non-financial private debt

As Brexit is finalized we find considerable speculation about the likely consequences for the UK and EU economies after the end of January.  Because this event has no clear precedent, much of the speculation derives from political predilections and opinion without an analytical anchor.  Since private investment plays a major role in both growth and diversification of economies, beginning with the motivation to invest might provide that anchor.

As Keynes argued, private investment has both a long run underlying technical link to production while driven by the expectations of capitalists (Keynes 1936, Chapter 12).  In the long term, the economy’s investment share adjusts to the technical requirements of production, the amount of capital input needed to achieve the level of output sought by businesses (the technical term is the “capital-output ratio”).

Expectations intervene in two ways.  First, expectations of future economic expansion will strongly influence the planned output of businesses.  Low expectations for sales growth will prompt modest investment plans, which will fulfil the expectation of slow expansion.  Second, short term pessimism provoked, for example, by recession, can cause a collapse of investment as occurred in the developed economies during 2008-2010.

The first chart below shows GDP growth for five large developed economies.  It begins with 2007, the last year of expansion before the Global Financial Crisis.  I do not include the two largest developing economies, China and India, because factors strongly influence their growth that do not affect the five countries in the chart.  Perhaps most notable are the growth-enhancing productivity gains associated with large scale transfer of labour from rural to urban activities.

Because my focus is on the effects of the UK leaving the European Union, I divide the years into three periods, the great contraction (2007-2010), the period of EU and UK fiscal austerity (2010-2016), and the quarters following the unexpected defeat of the UK referendum on EU membership.  The most obvious inference from the chart is the slow recovery from the deep recession of 2008-2010.  These slow rates of recovery would in themselves tend to provoke pessimistic expectations for business investment.

Second, only two countries show a negative impact of the UK vote on EU membership.  As expected, the UK itself has a drop from an annualized rate of 2.0% to 1.5.  Negative though less pronounced is the change for Germany, from 1.8% to 1.6.  For France an increase appears substantial.  The results are consistent with what we would anticipate, an apparent negative impact for the major EU trading partners UK and Germany, and no negative impact for the USA and Japan.

Two more charts switch from GDP to private investment for the same five economies as in the previous.  The first shows amounts at constant prices, all countries set to the base period at the start of the great contraction, 2008.1 =100. The initially striking result is that investment by UK companies has increased consistently below the level of the other countries except for a few quarters after the EU referendum.

The recovery of UK private investment after the great crash matched that of France and Germany into 2016, though below the US recovery.  However, in late 2016 and early 2017 UK investment peaked then declined slightly.  In the four other countries investment continued to grow, except for the mid-2019 declines in USA and Germany.  Thus, we have evidence of UK investment stagnation soon after the EU referendum. 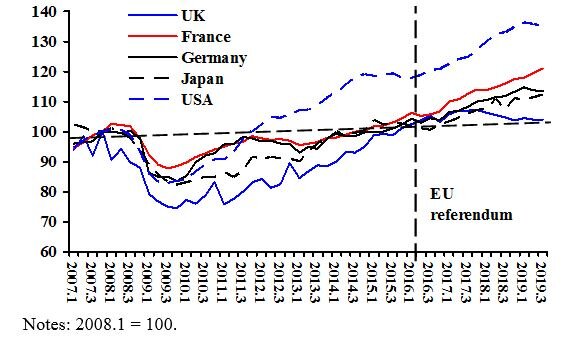 The low UK investment share has in part a technical explanation.  Of the five countries, the UK economy has the lowest share for industrial production.  The reasonable assumption that investment-output ratios are lower in services (including finance) than mining, manufacturing and construction helps explain the long term UK pattern, avoiding subjective judgements about investment motivation by UK capitalists.

The chart shows for the UK a steady investment share, which began over a year before the EU referendum.  It is extremely unlikely that UK capitalists could have anticipated the referendum vote so far in advance.  For all five countries the investment share in 2017 had recovered to its pre-crash level, suggesting an underlying relationship determined by the composition of production by sectors. 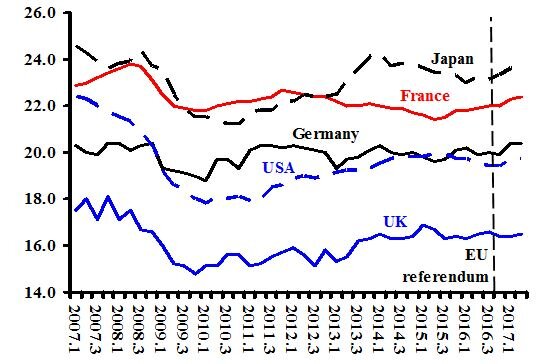 The final chart focuses on UK investment, dividing it into manufacturing and non-manufacturing, for the period 1997-2019, in constant prices and set to 2008.1 as the base quarter.  The stronger cyclical character of manufacturing investment jumps off the chart.  While we must be hesitant to draw conclusions from one quarter's behaviour, the decline in the third quarter of 2019 suggests the possibility a longer downturn in wake of exiting the EU as many have predicted.

A possible mitigating factor is the large UK trade deficit with Germany and the rest of the EU.  Whether imports or exports would suffer more and the net effect on domestic output is difficult to foresee.  Too often discussion of the trade impact of leaving the EU focuses on exports and "market access" without reference to imports. 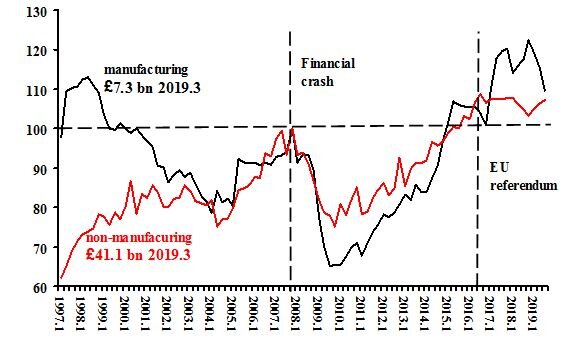 Looking to the Future

One certainty of the post-EU period, especially while trade negotiations proceed, is uncertainty.  Speculators thrive on uncertainty while it undermines the expectations of investors.  Developments in the global economy largely unrelated to UK membership in the European Union could increase that uncertainty.  Both the OECD and the IMF anticipate weak growth of output implying sluggish global trade in 2020 and beyond.  OECD goes so far as to cite risk of global recession, in part due to slowing of the Chinese economy.

In the EU itself the slow expansion over the last two decades is unlikely to change if global growth is weak.  The likelihood of a fiscal expansion by the government of any large country, especially Germany, remains remote.

This context gives obvious implications for UK economic performance in 2020.  The uncertainty arising from an unprecedented change such as leaving the EU in itself would depress investment in the short and medium term.  When we add the possibility of global recession and near certainty of slow EU growth, stagnant or falling investment seems the likely outcome for 2020 and 2021.

The expansion-depressing effect of low private investment may be in the modest range that could be counter-balanced by fiscal expansion. Expecting the current UK government to embark on a well-designed expansion would be excessively optimistic.  On the continent the combination of Brexit uncertainty and fiscal restraint should yield continued economic stagnation for Germany.