Home / Francis Coppola / Too Good To Be True

by
Frances Coppola
My articles My siteAbout meMy booksMy videos
Follow on:Twitter
Seeking Alpha
Summary:
"USD-backed stablecoin is 10x better than your savings account," runs the headline on an unsolicited press release in my inbox yesterday. And it goes on to explain: The average interest rate for savings accounts in the US currently stands at 0.09%, with some German banks even charging negative interest rates. Universal Protocol, a coalition of leading blockchain organizations, including Uphold, Cred, Blockchain at Berkeley, and Bittrex Global, has recently introduced interest rates of 10% p.a. for its USD-backed stablecoin UPUSD.  Ok, so they are issuing an altcoin at high interest rates. Why are they comparing this with FDIC-insured savings accounts? The UPUSD is a fully-transparent digital asset that is collateralized 1-to-1 with US dollars and held at US-domiciled, FDIC-insured 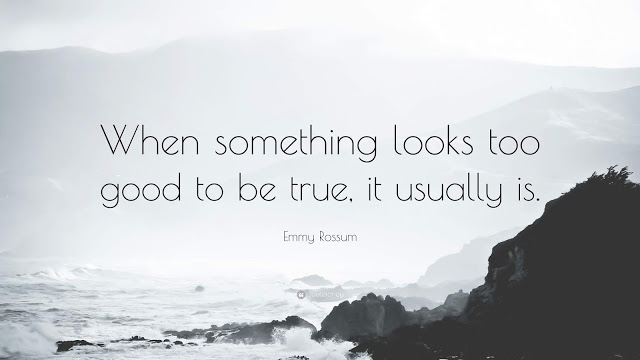 "USD-backed stablecoin is 10x better than your savings account," runs the headline on an unsolicited press release in my inbox yesterday. And it goes on to explain:

The average interest rate for savings accounts in the US currently stands at 0.09%, with some German banks even charging negative interest rates.

Universal Protocol, a coalition of leading blockchain organizations, including Uphold, Cred, Blockchain at Berkeley, and Bittrex Global, has recently introduced interest rates of 10% p.a. for its USD-backed stablecoin UPUSD.

Ok, so they are issuing an altcoin at high interest rates. Why are they comparing this with FDIC-insured savings accounts?

The UPUSD is a fully-transparent digital asset that is collateralized 1-to-1 with US dollars and held at US-domiciled, FDIC-insured banks.

But even when corrected, this statement is so misleading it amounts to mis-selling. It implies that anyone who invests in this altcoin benefits from FDIC insurance. This is not the first time I have seen this claim made about cryptocurrency investments. It wasn't true last time, and it isn't now.

FDIC insurance protects the customers of regulated US banks from losses if the bank fails. Currently, the insurance only covers US dollar holdings of up to $250,000 per depositor, institution and ownership category. Universal Protocol presumably has corporate accounts, which are an ownership category: these would thus be covered up to a maximum of $250,000 per bank (not per account).

Universal Protocol's website says its "mission" is to bring 100 million new users into cryptocurrency.  Assuming that the minimum a user can hold is one UPUSD, this would mean Universal Protocol holding $100m US dollars in FDIC-insured bank accounts. The US has more than 5,000 FDIC-insured banks and savings institutions, so it would in theory be possible for all of this money to be distributed across US banks. However, managing hundreds of banking relationships would be an enormous overhead. I suspect that if it comes anywhere near succeeding in its mission, Universal Protocol will find that ensuring FDIC backing for all of its USD reserves isn't something it really wants to do.

However, currently the reserves backing UPUSD are far below the FDIC limit. This is from the UPUSD page on Universal Protocol's website:

The stablecoin is underpinned by reserve management developed by Uphold, the world’s most transparent digital money platform, which has handled nearly $4 billion in transactions and publishes its assets and liabilities in real-time.

Uphold publishes its reserve holdings on its website. Tier 5 is described as "a series of tokens and stable coins issued by Universal Protocol as part of a new universal transparent reserve standard which features innovative safeguards like recoverability and inheritability." The three coins listed here are UPUSD, UPBTC and UPEUR. At the time of writing, UPUSD in issue are valued at $60,686.56. If these coins are fully backed by USD as Universal Protocol claims, then this is the amount of USD reserves currently held in banks. So they have some way to go before their claim that the reserves are fully FDIC-insured starts to look shaky.

But there is a much bigger problem with Universal Protocol's implied claim that UPUSD investments would be FDIC-insured. Uphold's description of UPUSD says this:

U.S. dollars are held at banks located in the United States with the intention of being eligible for FDIC “pass-through” deposit insurance, subject to applicable limitations.

Pass-through insurance applies when a bank has a fiduciary duty towards a third party, for example if it is acting as custodian for third party funds. It does not apply to investments. If pass-through insurance were to apply to customer UPUSD holdings, therefore, the USD reserves backing them would have to be held in custody accounts on behalf of UPUSD holders. But buried in Uphold's general terms and conditions is this (my emphasis):

Each Universal Stablecoin on the Platform corresponds to a related fiat currency, such as a U.S. dollar or Euro, held across one or more accounts at banks (each, a “Fiat Account”). Each Fiat Account is: (i) under our control; (ii) separate from our business, operating and other reserve bank accounts; (iii) established specifically for the benefit of users; and (iv) represents a banking relationship, and not a custodial relationship, with each bank. You agree and understand that Fiat Accounts do not create or represent any direct relationship between you and any of our banks and you cannot redeem a Universal Stablecoin at any of such banks.

This restriction is obviously necessary to prevent people going to the banks to exchange their stablecoins for dollars. But it means that buying UPUSD clearly isn't placing funds in custody at regulated banks. It is investing in digital assets for profit. Therefore it is extremely unlikely that UPUSD investments will ever be eligible for FDIC insurance, whatever Universal Protocol would like to think. Anyone buying UPUSD should assume that they are uninsured.

And it gets worse. Not only are these investments probably uninsured, they are also high risk, complex and opaque. And the returns on them aren't anything like as good as Universal Protocol claims.

There is good reason for the promised returns to prove elusive. Browsing Cred's website finds this:

Cred offers sub-10% APR on loans, not 25% like banks and credit card companies.

Clearly, it isn't going to pay anything like 10% on most deposits. Everything except BTC earns 3-5%. If the average loan rate is 8-10%, that is a respectable margin. But is an interest rate of 3% really sufficient to compensate investors for the loss of FDIC insurance, when online banks are offering between 1.5% and 2% on FDIC-insured accounts?

And then there is the nature of the lending on which these somewhat underwhelming returns depend.
When you lend your UPUSD, or BTC, or whatever, you aren't lending it to Uphold or Cred. You are lending it to third party borrowers. This was CredEarn's answer to the question "What do you do with my crypto assets?"

Cred offers crypto lending on a collateralized and guaranteed basis. Your crypto assets are used to lend. Cred acts as an intermediary between borrowers and lenders.

Cred says that borrowers borrow under its own credit line against cryptocurrency collateral. But the funds it lends out aren't its own. Unlike a bank, it physically transfers funds you have chosen to lend out into its lending pool:

Loan assets are swept from customer accounts on the 1st and 15th of every month. For example, if you pledge assets in the week of Jan 28th, funds will be removed from your Uphold wallet on February 1st and you will start earning interest that day (February 1st). If you pledge on February 5th, the assets will be swept from your account on the next funding date - February 15th - and you will start earning on Feb 15th.

And unlike a peer-to-peer lender, you won't know who borrows your funds or what they use them for. All you are told is this:

Your pledged assets are used to lend to and transact with a variety of customers, including retail borrowers and money managers with well-established track records.Cred does not lend to short-sellers.

Furthermore, the message on the Earn screen saying what Cred does with your pledged assets also appears on the Borrow screen. So it seems that Cred lends out the crypto assets that borrowers pledge as collateral. And you thought your funds were safe?

The press release I received misleadingly presents UPUSD as a high-interest substitute for FDIC-insured US dollar bank accounts. Nowhere does it say that UPUSD might not be covered by FDIC insurance. Indeed, by saying UPUSD is fully backed by USD reserves in FDIC-insured banks, it gives the impression that this investment is as safe as an insured savings account. It also fails to disclose the fact that the advertised interest rate can only be earned by taking on considerable market and credit risk, and that investors' funds may be used for speculative purposes. It is hard not to conclude that the press release is intended to mislead naive retail investors into moving their funds from insured savings accounts to highly risky uninsured investments.

Before writing this piece, I informed Dan Schatt, chairman of Universal Protocol and (surprise, surprise) president of Cred, of my intention to warn the public that his product is in no way equivalent to an insured bank savings account, that investments would not be FDIC insured, and that investors would only earn the advertised rate of interest if they allowed their funds to be lent to margin traders at high leverage. I invited him to explain to me why I should not do this. I received no response. So here is my warning.

High returns always mean high risk. If someone promises high returns with no risk, they are selling snake oil. Don't be fooled.

I’m Frances Coppola, writer, singer and twitterer extraordinaire. I am politically non-aligned and economically neutral (I do not regard myself as “belonging” to any particular school of economics). I do not give investment advice and I have no investments.Coppola Comment is my main blog. I am also the author of the Singing is Easy blog, where I write about singing, teaching and muscial expression, and Still Life With Paradox, which contains personal reflections on life, faith and morality.
My articlesMy siteAbout meMy books
Follow on:TwitterSeeking Alpha
Previous Central banks and Coronavirus
Next When is the right time for UBI and helicopter money?