by
Frances Coppola
My articles My siteAbout meMy booksMy videos
Follow on:Twitter
Seeking Alpha
Summary:
It's now widely accepted, though still not universally, that banks create money when they lend. But it seems to be much less widely known that they also create money when they spend. I don't just mean when they buy securities, which is rightly regarded as simply another form of lending. I mean when they buy what is now colloquially known as "stuff". Computers, for example. Or coffee machines. Imagine that a major bank - JP Morgan, for example - wants to buy a new coffee machine for one of its New York offices (yes, it has more than one). It orders a top-of-the-range espresso machine worth ,000 from the Goodlife Coffee Company, and pays for it by electronic funds transfer to the company's account. At the end of the transaction JP Morgan has a new coffee machine and Goodlife has ,000


Frances Coppola writes What was the real reason for the Bank of England’s gilt market intervention? 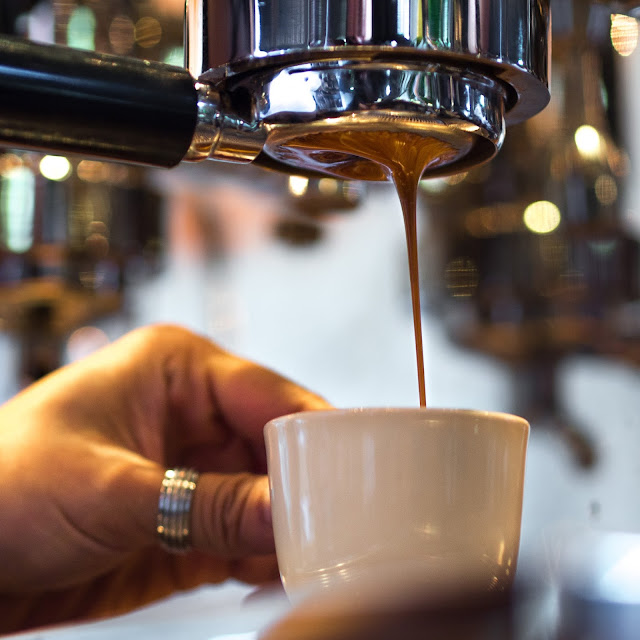 Imagine that a major bank - JP Morgan, for example - wants to buy a new coffee machine for one of its New York offices (yes, it has more than one). It orders a top-of-the-range espresso machine worth $10,000 from the Goodlife Coffee Company, and pays for it by electronic funds transfer to the company's account. At the end of the transaction JP Morgan has a new coffee machine and Goodlife has $10,000 in its deposit account.

But only banks can accept reserves, and Goodlife is not a bank. So although JP Morgan may pay with reserves, what Goodlife actually receives is bank money. As I shall show, this money is newly created in the course of the transaction.

In fact, JP Morgan does not necessarily pay with reserves anyway. Whether reserves are involved in this transaction at all depends on who Goodlife banks with.

Suppose Goodlife banks with JP Morgan. All JP Morgan has to do is put $10,000 into Goodlife's account and take delivery of the coffee machine. The balance sheet entries are as follows:

There is no reserve transfer in this transaction. Reserves are used only to transfer funds between banks, so since Goodlife banks at JP Morgan, reserves are not needed. JP Morgan pays for the coffee machine with newly-created bank money, not with pre-existing reserves.

A full balance sheet analysis would show that JP Morgan'e equity has reduced as a proportion of total assets. In effect, JP Morgan has paid for the coffee machine from its own equity.

So why did my twitter friends say JP Morgan paid for the coffee machine with reserves? Well, they were assuming that Goodlife didn't bank with JP Morgan. In this scenario, JP Morgan must transfer reserves to Goodlife's bank.

To show how this works, let's assume Goodlife banks with Citibank. The accounting entries for the two banks and Goodlife now look like this:

Note that in this case, the entries for JP Morgan, like those for Goodlife, are entirely on the asset side of the balance sheet. In effect, JP Morgan has exchanged reserves (asset) for a coffee machine (asset). Its balance sheet has not increased in size and its equity buffer is unchanged.

But Citibank's balance sheet has increased in size. It has new reserves (asset) of $10,000 and has created a new customer deposit (liability) of $10,000. Its equity buffer is now smaller as a proportion of total assets. Citibank has increased its leverage to accommodate JP Morgan's purchase of a coffee machine.

Now, lots of you will no doubt tell me that Citibank must create Goodlife's deposit when it receives reserves from JP Morgan, because otherwise its books won't balance. Sadly it's not quite so simple. The accounting above leaves out perhaps the most important part of all payment transactions - the messages that banks send to each other.

Messaging is the untold story of payments. "JP Morgan pays for its coffee machine with reserves" is technically true, but it's only half the story. What JP Morgan actually does is send Citibank a message instructing it to pay for the coffee machine with its own money, and transfers reserves to Citibank in compensation. It's rather as if I ask you to go and buy me a pastrami sandwich and a latte. You pay out of your own pocket and I reimburse you when you deliver my lunch.

So, JP Morgan instructs Citibank to credit Goodlife's account with $10,000. On receiving this message, Citibank increases the ledger balance on Goodlife's account by $10,000. At this point the reserve transfer has not been completed, and it might not complete for some hours or even days. But Goodlife can see the money in its Citibank account, and on that basis, delivers the coffee machine.

However, banks are far more canny than people. If you were a bank, you wouldn't let me eat the lunch you bought me until I had paid you. Or if you did allow me to eat before paying, you would charge me interest on every mouthful. So Goodlife can't access its money until the reserve transfer from JP Morgan has completed. Citibank might allow Goodlife to "draw" on its uncleared balance, but this is actually lending. It's a short-term overdraft secured on the collateral of the anticipated payment. And Citibank would charge interest on it. Banks never knowingly pass up a chance to make money.

Messaging can go wrong, with unfortunate effects. This is more likely in international payments, which are by definition  complex and risky. But it's not unheard-of in domestic payments. Suppose the message from JP Morgan fails to arrive, perhaps because of a systems outage. Citibank receives the reserves, but it doesn't know that it has to put money in Goodlife's account. So it creates an entry in an "unidentified items" account. JP Morgan thinks it has paid, but Goodlife has not received the momey. There ensues a flurry of emails between an angry bank that thinks it has been defrauded of $10,000 and an equally angry coffee machine supplier that thinks its customer has failed to pay for goods it has ordered.

Similarly, if the message contains wrong instructions - "pay $10,000 to Chris' Coffee", for example - the money goes astray even if the reserve transfer completes correctly. Transferring reserves is not by itself sufficient to complete the coffee machine transaction.

Whenever a bank buys something from a non-bank, new money is created. That is true whether or not the transaction involves a reserve transfer between banks. Focusing only on reserve transfers, and ignoring the vitally important role of payment messages and bank deposit creation, entirely misses the point.

Money creation in the modern economy - Bank of England

Many thanks to Goodlife Coffee Company and Chris' Coffee for allowing me to take their names in vain. I hope this piece drives some genuine business to their long-suffering sites.

I’m Frances Coppola, writer, singer and twitterer extraordinaire. I am politically non-aligned and economically neutral (I do not regard myself as “belonging” to any particular school of economics). I do not give investment advice and I have no investments.Coppola Comment is my main blog. I am also the author of the Singing is Easy blog, where I write about singing, teaching and muscial expression, and Still Life With Paradox, which contains personal reflections on life, faith and morality.
My articlesMy siteAbout meMy books
Follow on:TwitterSeeking Alpha
Previous Crypto’s Weimar
Next Maya Forstater’s human rights problem