by
Frances Coppola
My articles My siteAbout meMy booksMy videos
Follow on:Twitter
Seeking Alpha
Summary:
A cryptocurrency has just re-enacted the Weimar hyperinflation.Yesterday, the price of the cryptocurrency TITAN crashed to zero, and its related stablecoin IRON fell off its USD peg, trading as low as 69 cents to the dollar. It was a sudden and dramatic collapse that left investors shocked and bewildered. Equally shocked and confused, the coins' issuer launched an immediate investigation: Iron Finance issued its post mortem a few hours later. This is the key paragraph:Later, at around 3pm UTC, a few big holders started selling again. This time, after they started, a lot of users panicked and started to redeem IRON and sell their TITAN. Because of how the 10mins TWAP oracle works, TITAN spot price drops even further in comparison to the TWAP redemption price. This caused a negative 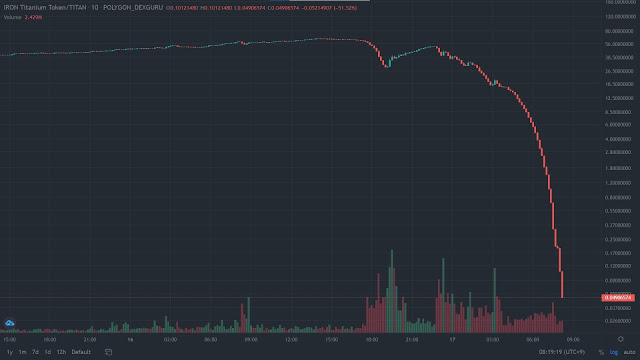 A cryptocurrency has just re-enacted the Weimar hyperinflation.

Yesterday, the price of the cryptocurrency TITAN crashed to zero, and its related stablecoin IRON fell off its USD peg, trading as low as 69 cents to the dollar. It was a sudden and dramatic collapse that left investors shocked and bewildered. Equally shocked and confused, the coins' issuer launched an immediate investigation: 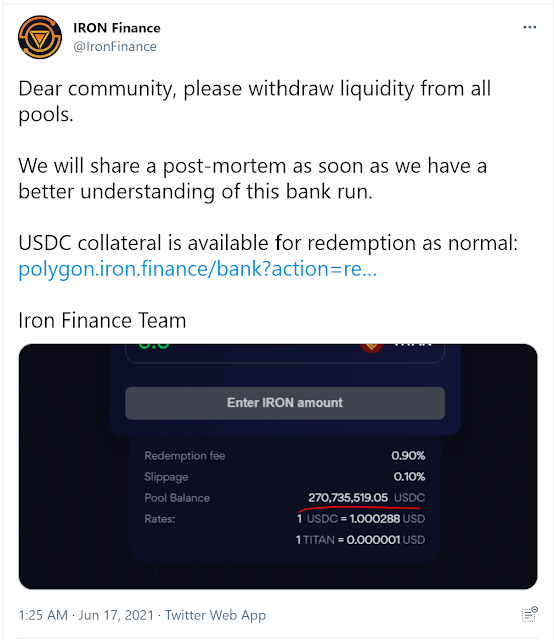 Iron Finance issued its post mortem a few hours later. This is the key paragraph:

Later, at around 3pm UTC, a few big holders started selling again. This time, after they started, a lot of users panicked and started to redeem IRON and sell their TITAN. Because of how the 10mins TWAP oracle works, TITAN spot price drops even further in comparison to the TWAP redemption price. This caused a negative feedback loop, as more TITAN was created (as a result of IRON redemptions) and the price kept going down. A classic definition of an irrational and panicked event also known as a bank run. At the time of writing this, the TITAN supply is 27,805 billion.

This is a good, though brief, summary of what happened. But no way was this an "irrational and panicked event". It was a speculative attack on the IRON stablecoin's peg, aided and abetted by panic selling (which was no doubt what the speculators hoped for).. And it succeeded, because the peg relied on a fundamentally flawed mechanism.

IRON is fractionally reserved. 75% of collateral is in USDC, whose value is effectively fixed at 1 USD per token, but the remainder is in TITAN, a floating value token also issued by Iron Finance. According to IRON's whitepaper, TITAN is the swing asset that maintains IRON's collateral value, and therefore its price, at around 1 USD:

The price of TITAN relies on demand for it as collateral for IRON:

So, when demand for IRON tokens rises, TITAN's price rises, and when demand for IRON tokens falls, TITAN's price falls.The mechanism is therefore totally circular. IRON relies on TITAN to maintain its peg, and TITAN relies on demand for IRON to support its price. The likelihood of a feedback loop developing is immense. In fact, it is necessary. The whole strategy relies on a feedback loop. Just not the feedback loop that actually developed.
IRON tokens are minted and redeemed at par to USD, whether or not IRON is actually trading at par. So, to mint 100 IRON tokens you need 75 USDC and the equivalent in TITANs of $25: the USDC will be locked up in the collateral pool, and the TITANs will be burned. If you redeem (or burn) 100 IRON tokens you will receive 75 USDC and the equivalent in TITANs of $25: the USDC are drawn from the collateral pool and the TITANs are newly minted. Thus, if IRON deviates from its par peg, the fixed rate for minting and redemptions creates arbitrage opportunities that should quickly bring it back to par.
But TITAN is a traded token in its own right, and its price movements affect the price of IRON. If TITAN's price rises, the value of IRON's collateral also rises, which will increase demand for it and hence tend to pull it above its par peg. Similarly, if TITAN's price falls, the value of IRON's collateral also falls, reducing demand for IRON and hence tending to push it below its par peg. The whitepaper assumes that demand for TITAN would be strong because of its role of IRON collateral, so as TITAN's price rose, more IRON would be minted. A lovely positive feedback loop resulting in profit for TITAN investors and a reliably pegged USD stablecoin. What's not to like?
However, because IRON's price falls when TITAN's does, a speculative attack on TITAN could push IRON off its peg. The question is, why would someone want to do this?
The answer lies in that fixed redemption rate. IRON is effectively hard-pegged to the US dollar. The whitepaper calls it a soft peg, but this is just one of many indications in the paper that the creators of this algorithm don't understand currency pegs. The "floating collateralization ratio" is wholly irrelevant. It is the redemption value that matters, and that is fixed at 1 USD.
So, if  IRON is trading below par, speculators can earn a risk-free profit by redeeming IRON tokens for USDC and TITAN. Admittedly, if IRON is off its peg because TITAN's price is falling, speculators would have to sell the TITAN quickly to prevent the risk-free profit evaporating. The whitepaper writers appear to have assumed that arbitrageurs would prefer to hang on to the TITAN in the expectation that the price would quickly recover and IRON return to its par value.
But there's an alternative that could potentially earn arbitrageurs much more. They could use the TITAN tokens they've just minted to mint more IRON then sell it immediately to mint even more TITAN, thus  accelerating TITAN's price collapse and encouraging more redemption of IRON. Such a mint-redeem loop, amplified by active selling of TITAN on the open market, would force IRON further off its peg. And once IRON was trading below 75 cents, TITAN's price would no longer matter. Speculators could effectively claim free US dollars by redeeming IRON for 75 USDC.
In my view, this was the real aim of the whales who started this "run". Crashing the price of TITAN was merely a means to an end. So TITAN's collapse was not a panicky bank run, as Iron Finance thinks. It was a deliberate attack on a USD-pegged token to force the peg to break.
As TITAN's price fell, IRON's redemption mechanism had to mint more and more TITANs to deliver par value for IRON redemptions. But increasing the supply of an asset when its price is falling feeds the deatth spiral. There are now 27 trillion TITANs, and they are all worthless.
When this happens in a fiat currency system, we call it hyperinflation. The classic example is the Weimar Republic's hyperinflation of nearly a century ago.
In 1923, the Weimar government had to service wartime debts denominated in assorted foreign currencies including the pound and the US dollar, and it also had to pay war reparations in gold. So, as the mark collapsed under sustained speculative attack, the Reichsbank printed more and more money to enable the government to meet its obligations, thus feeding the price fall. Soon, the currency became worthless both externally and domestically.
IRON's automated redemption mechanism unwittingly re-created the Reichsbank's money printing. That's how it turned a price crash into a death spiral. That is how money dies.
So it was Weimar-style money printing that destroyed TITAN. But just as in Weimar the real problem was wartime debts and reparations, so the real cause of TITAN's collapse was the algorithm's design flaws. Fractionally reserved stablecoins are unstable by design unless they have insurance and/or capital to cover the possibility that reserves prove inadequate. And printing your own collateral, as Iron Finance tried to do, doesn't fool people for long. In the end, people want real money, and if you design into your algorithm an opportunity for people to collect real money for free, you can hardly blame people for trying to collect it.
Responsibility for this disaster rests firmly at the door of the designers of the algorithm.  The whales who brought about the crash of TITAN were simply doing what speculators do. And in a well-functioning market, speculators are not only natural, they are essential. They are the predators that kill off the old, weak and inadequate. If they are prevented from doing their job, the free market can never really be free.

So, respect to the whales who killed off TITAN. By eliminating a bad product, they've done a public service. People who believe in the free market should be celebrating the crash of TITAN, not calling for regulation to prevent such a crash from happening.

Related reading:
When Money Dies - Fergusson (pdf)
The Meltdown of Iron - Irony Holder
Irony Holder's piece reports that the free money only lasted until TITAN's price fell to zero. At that point an "error in the code" locked up the USDC, making it impossible to claim. That "errror" may have saved Iron Finance's bacon. Was it really an error, or did some enterprising coder foresee this and put in a failsafe?
cryptocurrency FX Hyperinflation 2021-06-18
Frances Coppola
Full story here
Are you the author?
0 0

I’m Frances Coppola, writer, singer and twitterer extraordinaire. I am politically non-aligned and economically neutral (I do not regard myself as “belonging” to any particular school of economics). I do not give investment advice and I have no investments.Coppola Comment is my main blog. I am also the author of the Singing is Easy blog, where I write about singing, teaching and muscial expression, and Still Life With Paradox, which contains personal reflections on life, faith and morality.
My articlesMy siteAbout meMy books
Follow on:TwitterSeeking Alpha
Previous Bank capital and cryptocurrencies
Next JP Morgan’s Coffee Machine

May Retail Sales Fell 1.3% After April Sales Were Revised 1.4% Higher