The sinking of Voyager

by
Frances Coppola
My articles My siteAbout meMy booksMy videos
Follow on:Twitter
Seeking Alpha
Summary:
Friday was quite a day. The crypto lender BlockFi provisionally agreed a bailout deal with FTX. The hedge fund Three Arrows Capital (3AC), already in compulsory liquidation in its home territory the British Virgin Islands, filed for Chapter 15 bankruptcy protection in the United States. And the crypto broker Voyager suspended trading and withdrawals. Voyager's press release revealed a massive hole in its balance sheet. Some 58% of its loan book consists of loans to 3AC:And its loan book is nearly 50% of total assets:So approximately 28% of Voyager's assets are in default. And since 3AC now has creditor protection, Voyager must wait for bankruptcy courts to decide how much, if anything, can be recovered. That will take months. But the balance sheet hole doesn't explain why Voyager has


Frances Coppola writes What was the real reason for the Bank of England’s gilt market intervention? Friday was quite a day. The crypto lender BlockFi provisionally agreed a bailout deal with FTX. The hedge fund Three Arrows Capital (3AC), already in compulsory liquidation in its home territory the British Virgin Islands, filed for Chapter 15 bankruptcy protection in the United States. And the crypto broker Voyager suspended trading and withdrawals.

Voyager's press release revealed a massive hole in its balance sheet. Some 58% of its loan book consists of loans to 3AC:

And its loan book is nearly 50% of total assets:

So approximately 28% of Voyager's assets are in default. And since 3AC now has creditor protection, Voyager must wait for bankruptcy courts to decide how much, if anything, can be recovered. That will take months.

But the balance sheet hole doesn't explain why Voyager has suspended US dollar withdrawals. Despite its apparently healthy "cash held for customers" balance, it seems to be dreadfully short of cash. There is something else going on here.

As always when something doesn't quite add up, I take a look at the books. In May, only a few days after Terra's collapse, Voyager released its quarterly financial update, dated 31st March. The income statement makes grim reading: 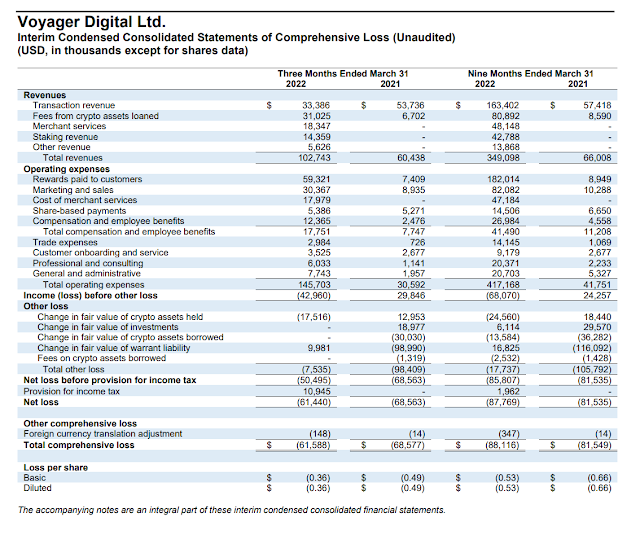 Voyager is making whopping losses. Like all crypto companies this year, it has taken a mammoth hit on the fair value of its crypto assets. But it's the operating loss that concerns me. In the nine months ended March 31, 2022, it spent over $82m on marketing and sales and a further $182m on customer rewards, far above what it was earning from staking and loan fees. This turned what might have been a decent if uninspiring operating profit into a $68m loss. Such exorbitant expenditure on building a customer base reminds me of WeWork during Adam Neumann's tenure as CEO - and we all know how that ended, don't we?

It has burned through nearly $200m in nine months. During this time, Voyager did a $75m private placement shares issue to raise some cash. But it wasn't anywhere near enough. At the end of the period its total cash and cash equivalents, including cash held for customers, was down by nearly $145m.

So Voyager has no cash and deeply negative income. And its available assets are now considerably less than its liabilities. It is almost certainly insolvent, though it has not yet filed for bankruptcy.

But Voyager wasn't insolvent when these accounts were produced. Its current assets were easily enough to cover its current liabilities, its net assets were positive, and its ratio of equity to assets (unweighted) was a thin but comfortable 4.2%. 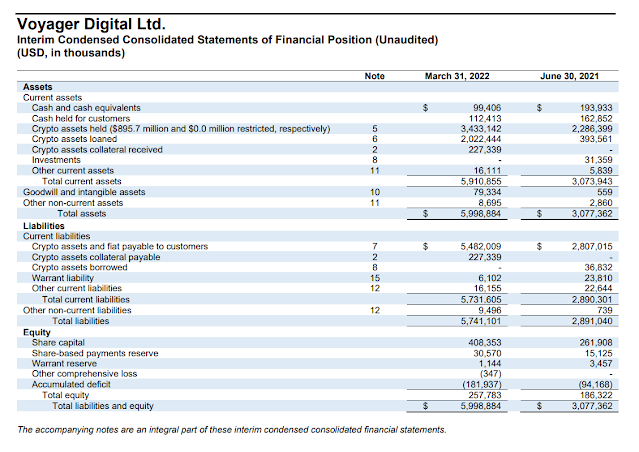 Voyager's liquidity was strained, but as long as it could borrow against its assets, it would be able to meet its obligations as they fell due.

The collapse of 3AC created a golden opportunity for Voyager to borrow the money it desperately needed. The crypto billionaire Sam Bankman-Fried, CEO of FTX and founder of the asset manager Alameda, was bailing out distressed crypto lenders like BlockFi. Voyager's management decided they wanted a piece of that - after all, Alameda was already a Voyager shareholder. So, saying it wanted to "safeguard customer assets in light of current market volatility", Voyager arranged new revolving credit facilities of $200m USD/USDC and 15,000 BTC with Alameda.  Simultaneously, Voyager Digital issued a notice of default against 3AC.

Presumably Alameda looked at Voyager's books and decided that the company was basically sound. And presumaly they also thought Voyager had a good chance of getting its money back from 3AC. So their decision to provide Voyager with additional liquidity wasn't unreasonable. Shoring up liquidity when the market is turbulent can prevent basically sound companies from failing.

But 3AC's BVI compulsory liquidation and US Chapter 15 bankruptcy was a game changer. Suddenly, Voyager no longer had a strong balance sheet. It had a steaming pile of extremely distressed and probably unrecoverable loans. And shoring up liquidity for a company whose assets are evaporating is a mug's game, as Carillion's lenders discovered to their cost. Did Alameda pull its credit lines?

If it did, that would explain why Voyager suspended all withdrawals including US dollars. It does not have sufficient ready cash to pay its customers, and it can't borrow any more.

But Voyager has told its customers that their US dollar balances are safely held in an omnibus account at its FDIC-insured partner bank. Furthermore, its customer service agreement says that because all movements in and out of the account are controlled by the bank, the customers are therefore customers of the bank: 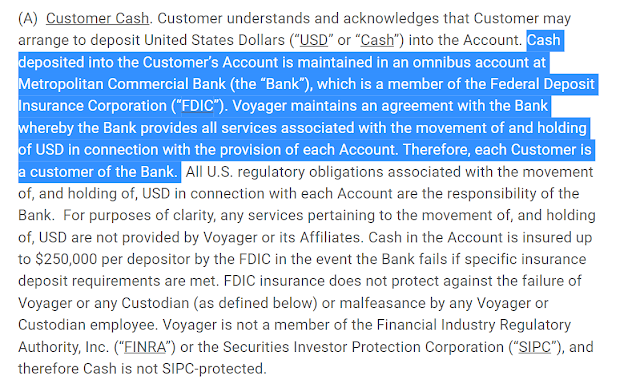 Now, this is odd. If movements in and out of the account are controlled entirely by the bank on behalf of Voyager's customers, then Voyager should not be able to suspend US dollar withdrawals. But it has.  Clearly, therefore, Voyager is controlling access to the money, despite its statement that it does not provide "any services pertaining to the movement of, and holding of, USD".

And there is a second mystery. If all US dollars belonging to its customers are in the omnibus account as it claims, why has Voyager suspended US dollar withdrawals? It clearly had to suspend conversion of crypto balances into US dollars, because it now has no means of obtaining those dollars. But there seems no reason to suspend withdrawal of existing US dollar balances - unless there isn't enough cash in the omnibus account to reimburse all US dollar depositors.

This brings us back to Voyager's enormous cash burn over the last nine months. "Cash held for customers" is supposed to be segregated, but as it's on Voyager's own balance sheet this is merely an accounting fiction. There's nothing to stop Voyager borrowing its customers' dollars. So, what if Voyager has used the omnibus account as a source of dollar liquidity? What if it has drained that account to defray its exorbitant operating expenses, and now can't put the money back? Indeed, what if all along it has funded that account on a just-in-time basis, borrowing US dollars when needed to meet withdrawal requests, and now it can't fund it any more because its credit lines have been pulled? This would explain why it has had to suspend US dollar withdrawals. It can't pay out money it doesn't have and can't get.

The omnibus account at Metropolitan Commercial Bank comes with FDIC insurance of up to $250,000. This protects the money in that account from loss in the event of the bank's failure. It does not protect Voyager's customers from losses in the event of Voyager's failure. This is clearly stated in Voyager's own customer service agreement (cited above):

FDIC insurance does not protect against the failure of Voyager or any Custodian (as defined below) or malfeasance by any Voyager or Custodian employee.

It is hardly surprising that Voyager's customers, deprived of their US dollars, are asking "When FDIC?"

An enterprising Voyager customer rang FDIC to ask how they could claim on the insurance. The answer was clear and comprehensive:

Metropolitan Commercial Bank has also put out a statement confirming that FDIC insurance would only be triggered in the event of its own insolvency, not Voyager's:

Oh, and in case you were wondering, SIPC protection doesn't apply either - not surprisingly, since Voyager's products are not registered as securities. Again, this is clearly stated in Voyager's own customer service agreement:

Voyager is not a member of the Financial Industry Regulatory Authority, Inc. ("FINRA") or the Securities Investor Protection Corporation ("SIPC"), and therefore Cash is not SIPC-protected.

There will no doubt be calls for retail depositors in risky enterprises like Voyager to have some form of insurance protection. But to my mind, the biggest problem here is mis-selling. Voyager deliberately marketed its accounts as safe products for retail customers, using FDIC insurance as the "hook" to trawl them in. It did so knowing that FDIC insurance would not protect those customers in the event of Voyager's insolvency.

Furthermore, for FDIC insurance limits to apply to individual Voyager customers as if they were customers of the insured bank, as Voyager's customer service agreement implies, Voyager would have to be acting as agent or fiduciary for its customers in the placing of US deposits with its banking partner, and those deposits would have to be properly segregated as client funds. But nowhere in Voyager's legal agreements does it say that it acts as agent or fiduciary for its US dollar customers. It shows the funds on its own balance sheet, so they clearly aren't segregated. And it controls access to the funds. So it is hard to see why passthrough insurance limits would apply. And if they don't, then in the event of Metropolitan Commercial Bank failing, FDIC insurance would be limited to $250,000 in total, not $250,000 per customer, and would go to Voyager, not its customers. So customers would lose some or all of their money if the bank failed. Voyager's marketing was seriously misleading.

Voyager also gave the impression that its investments were safe when they were anything but. The loan book is extremely concentrated: almost all the lending is to only 7 counterparties, of which the largest by far is 3AC. 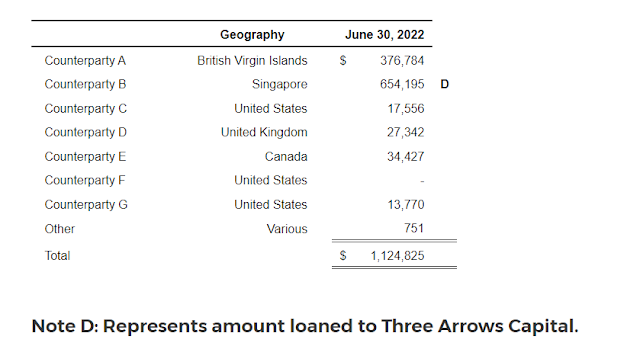 And the loans are seriously undercollateralized. In the earnings call on 16th May, Voyager's CEO, Steve Ehrlich, admitted that there isn't much collateral, but insisted that high levels of effectively unsecured lending were absolutely fine:

But his largest borrower, 3AC, was already heading for bankruptcy because of its exposure to Luna/UST. Clearly, he didn't know his borrowers nearly as well as he needed to.

I have no problem with a hedge fund lending only to seven counterparties, if it is lending its own funds or those of professional investors who understand the risks they are taking. But Voyager marketed high-risk investments to retail depositors with promises of safety and (non-existent) insurance. To my mind, this isn't just bad, it is criminal. But crypto is an unregulated, borderless space. Even if Voyager has lied to its customers and embezzled their funds, it is unclear what if any power national authorities have to hold it to account. And even though there will undoubtedly be a forest of lawsuits, the money is gone.

Sorry, Voyagers. You are going down with this ship, and no lifeboat will save you.

Image by Reimund Bertrams from Pixabay

I’m Frances Coppola, writer, singer and twitterer extraordinaire. I am politically non-aligned and economically neutral (I do not regard myself as “belonging” to any particular school of economics). I do not give investment advice and I have no investments.Coppola Comment is my main blog. I am also the author of the Singing is Easy blog, where I write about singing, teaching and muscial expression, and Still Life With Paradox, which contains personal reflections on life, faith and morality.
My articlesMy siteAbout meMy books
Follow on:TwitterSeeking Alpha
Previous There’s no such thing as a safe stablecoin
Next Shipwrecked