by
Frances Coppola
My articles My siteAbout meMy booksMy videos
Follow on:Twitter
Seeking Alpha
Summary:
Today, I bring you the sad tale of a crypto lender that promised safety and high returns to its depositors, but whose promises have proved to be as hollow as its name. Donut Inc., a self-proclaimed DeFi" lender, has a "Proof of Reserves" section on its website. This is supposed to reassure customers that their deposits are matched one for one by the platform's liquid assets. I am firmly of the opinion that "Proof of Reserves" statements prove nothing without a corresponding statement of liabilities, since deposits aren't the only form of liability, and encumbered assets can't back deposits. But in this case, the "Proof of Reserves" is worse than useless. It is actually fiction. And it conceals a truly dreadful situation for Donut's customers.  As of today, this is what the "Proof of 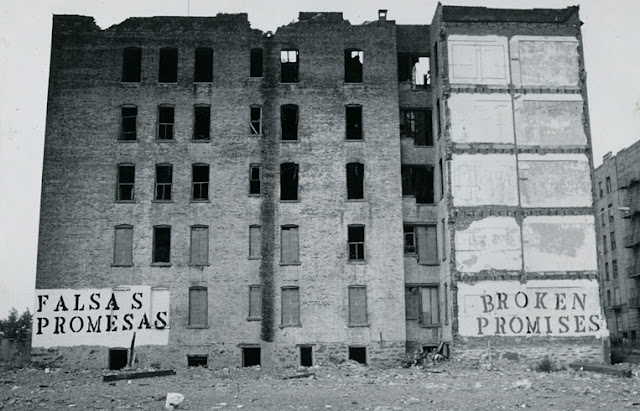 Today, I bring you the sad tale of a crypto lender that promised safety and high returns to its depositors, but whose promises have proved to be as hollow as its name.

Donut Inc., a self-proclaimed DeFi" lender, has a "Proof of Reserves" section on its website. This is supposed to reassure customers that their deposits are matched one for one by the platform's liquid assets. I am firmly of the opinion that "Proof of Reserves" statements prove nothing without a corresponding statement of liabilities, since deposits aren't the only form of liability, and encumbered assets can't back deposits. But in this case, the "Proof of Reserves" is worse than useless. It is actually fiction. And it conceals a truly dreadful situation for Donut's customers.

As of today, this is what the "Proof of Reserves" says: 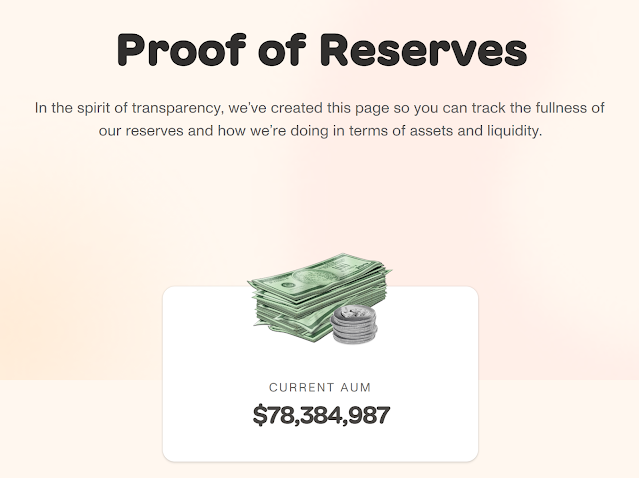 By itself, this doesn't prove anything at all. It's just an unsupported statement of what the company calls "assets under management".* We need to know what these assets are and how they protect customer deposits.
Scrolling down the page brings us to this: 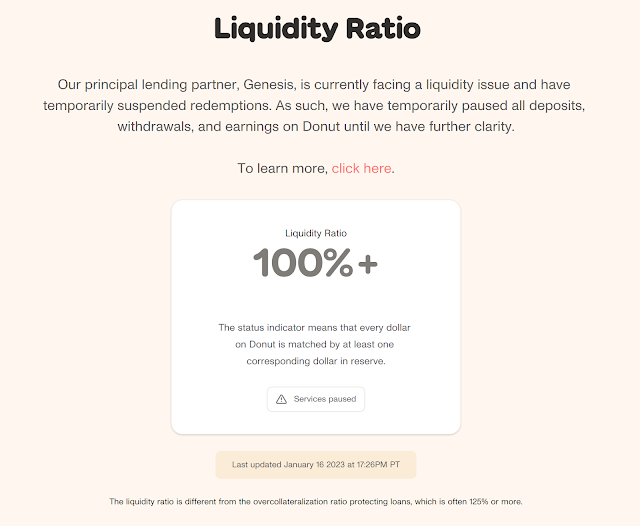 Really, Donut? You have 100% liquidity, but you've had to suspend withdrawals because your principal lending partner has suspended redemptions?
The claim that "every dollar on Donut is matched by at least one corresponding dollar in reserve" is very evidently untrue. There are two types of customer assets on Donut: cash deposits, and loans to Donut's lending partners.
Cash deposits are held by Donut's partner bank Evolve Bank & Trust, and banking services are provided by the Banking-As-a-Service company Synapse FI. FDIC-insured banks do not hold one dollar in reserve for every dollar on deposit. They are fractionally reserved, which means they do not hold sufficient actual dollars to enable all depositors to withdraw their funds simultaneously. When an FDIC-insured bank suffers a run, it must borrow cash to settle deposit withdrawals. Recently, runs on the crypto-related bank Silvergate have forced it to borrow large amounts from the Federal Home Loan Bank (FHLB).
But on Donut, dollars don't remain dollars for long. Donut automatically converts them to USDC and lends them out: 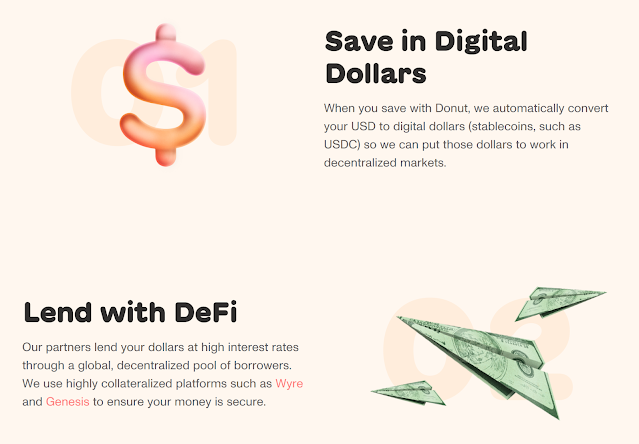 As funds on Donut are automatically lent out to earn interest, all the bank and its agent really do is provide a funding service. Donut accounts can be funded by manual or scheduled funds from bank accounts or with credit and debit cards, and it also has a wage deposit facility. All of these funding methods necessarily involve a bank.
So for the brief time that dollars exist in Donut accounts, they are held in a fractionally-reserved bank and are therefore not backed 1:1 by actual dollars. And once they have been converted to USDC and lent out, the customer asset is an illiquid loan. So whatever is backing customer deposits on Donut is not dollars.

This is why a liquidity problem at a lending partner forces Donut to suspend withdrawals. It does not hold anything like enough actual dollars to settle customer withdrawal requests, and it also does not have much in the way of assets it can pledge for dollars. In fact as we shall see, right now it has almost no liquidity. And that is because of the nature of its lending.

Donut says it lends to what it calls "prime brokers", who in turn lend to high-yielding (and highly risky) ventures. That's how the high yields Donut promises are generated. In fact the yields are rather higher than Donut pays to its depositors. In an article on its Help Centre, it explains how it makes money:

This is the business model of a bank. So Donut is yet another unregulated, unsupervised and uninsured crypto bank that promises safety and high returns to its depositors while making money (or losing it) on opaque and highly risky lending.
And it is now in very big trouble. Here's Donut's list of approved borrowers:

So it only has three approved borrowers - and the biggest by far is Genesis Global.
Genesis Global suspended withdrawals on 16th November 2022 in the wake of FTX's collapse,  citing "exceptional market turmoil". This is the "liquidity issue" Donut mentions on its Proof of Reserves page.

But as with FTX, Genesis's "liquidity issue" has turned out to be insolvency. On 20th January 2023, Genesis Global filed for Chapter 11 bankruptcy in the United States. The bankruptcy filing (pdf) reveals that it owes creditors over $5 bn. One of those creditors is Donut. In fact Donut is the 10th biggest creditor (click for larger image): 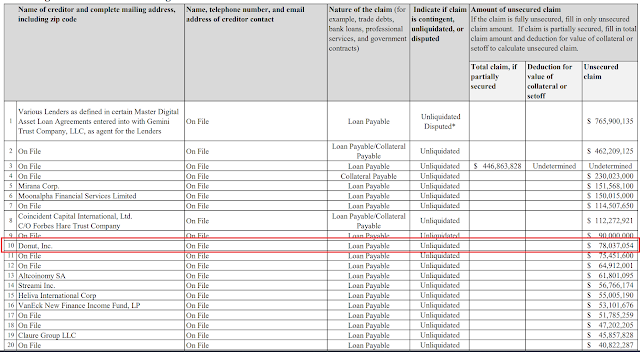 So Genesis owes Donut $78,037,054. Donut's Proof of Reserves says it has $78,384,987 AUM. Of those AUM, therefore, all but $347,933 consist of loans to Genesis. That is 99.55% of its total AUM.
Furthermore, Donut's loans to Genesis are unsecured. There is no collateral that can be liquidated to repay Donut's customers.
Now this is odd. Donut's website appears to say that its lending is overcollateralized:

"Defi lending is highly collateralized, typically over 125%. This makes it more likely that in the event of a borrower default, there may be sufficient collateral to protect your funds"

So has Donut lied? Technically, no it hasn't. It calls Genesis a prime broker, not a DeFi borrower. It describes Genesis is a "highly collateralized" platform, by which it appears to mean that Genesis's own borrowers post large amounts of collateral (which it now appears isn't true, though that's a separate issue). But it does not say that Genesis was posting collateral against its own borrowing from Donut. Clearly, it wasn't.
However, I would regard Donut's repeated insistence that customer funds were safe because lending was "overcollateralized" as misleading to the point of dishonesty. Donut's actual lending wasn't collateralized, and it didn't have any control whatsover over what Genesis did with the money. It claims to have done due diligence on its borrowers, but clearly whatever it did was nowhere near adequate.
All Donut now has by way of "reserves" is a massive pile of defaulted loans. Its liquidity is zero, not 100%. Its Markets Update about Genesis's Chapter 11 bankruptcy reveals the extent of the mess it has created for its customers:

"Your current balance, after withdrawing the full value of your funds from other lending partners, is with Genesis in its entirety, who continues to prevent withdrawals. Donut is not holding any of your funds nor preventing withdrawals."

The funds are gone and Genesis is not in position to return them.

Nor is Donut in a position to make its customers good. It has hardly any liquidity and no means of obtaining any. So it is rationing the little it has. Build customers can withdraw 14.5% of their balances, but Save customers, who are the majority of Donut's customers (and, it would seem, more exposed to Genesis) can only withdraw 5%. That's a rubbish recovery rate.

Donut seems to be banking on the Chapter 11 process enabling it to make good its customers. But unlike Gemini's Earn customers, Donut customers are not listed as direct creditors of Genesis. Rather, Donut itself is the creditor. So Donut, not Genesis, is responsible for making good its customers. And if it can't, then it should file for Chapter 11 bankruptcy itself.
But whether or not Donut files for Chapter 11, its customers have probably lost most of their money. Genesis is deeply, deeply insolvent, and there is a massive pile of unsecured creditors - not least, Gemini's Earn depositors - who rank pari passu with Donut. Furthermore, Genesis has proposed a restructuring plan (pdf) that could mean coercive bail-in of unsecured creditors. If this went ahead, then Donut's customers could suffer potentially large unrecoverable losses.

I don't see any possibility of Donut's customers recovering all, or even much, of their money. Heaven help anyone who was paying their wages into this ghastly scheme, or who had put student loans or other debt on deposit here. Just like Voyager, Celsius and BlockFi, ordinary people will pay the price for Donut's mis-selling, mismanagement and dishonesty.

Regulators must now hunt down and kill all crypto platforms that mis-sell risky loan schemes as "safe" and offer high yields to attract naive retail customers. . They are a plague, and they need to be stamped out, before anyone else gets hurt.
Related reading:
Too Good To Be True
From bank vaults to the crypt - The Mint
Shipwrecked
*I've complained before about the misuse of this term by crypto lenders, but in this case I'll let it pass, as the status of Donut deposits is unclear - though there doesn't seem to have been much "management" going on.
Image: Broken Promises by John Fekner. User Incantation on en.wikipedia, CC BY-SA 3.0 <http://creativecommons.org/licenses/by-sa/3.0/>, via Wikimedia Commons
banks crypto default deposits lending 2023-01-23
Frances Coppola
Full story here
Are you the author?
0 0

I’m Frances Coppola, writer, singer and twitterer extraordinaire. I am politically non-aligned and economically neutral (I do not regard myself as “belonging” to any particular school of economics). I do not give investment advice and I have no investments.Coppola Comment is my main blog. I am also the author of the Singing is Easy blog, where I write about singing, teaching and muscial expression, and Still Life With Paradox, which contains personal reflections on life, faith and morality.
My articlesMy siteAbout meMy books
Follow on:TwitterSeeking Alpha
Previous Snake oil sellers in the stablecoin world