Home / Francis Coppola / Britain was not “nearly bust” in March

by
Frances Coppola
My articles My siteAbout meMy booksMy videos
Follow on:Twitter
Seeking Alpha
Summary:
"Britain nearly went bust in March, says Bank of England", reads a headline in the Guardian. In similar vein, the Telegraph's Business section reports "UK finances were close to collapse, says Governor":Eh, what? The Governor of the Bank of England says the UK nearly turned into Venezuela? Well, that's what the Telegraph seems to think: The Bank of England was forced to save the Government from potential financial collapse as markets seized up at the height of the coronavirus crisis, Governor Andrew Bailey has said. In his most explicit comments yet on the country's precarious position in mid-March, Mr Bailey said 'serious disorder' broke out after panicking investors sold UK government bonds in a desperate hunt for cash. It left Britain at risk of failing to auction off the gilts needed 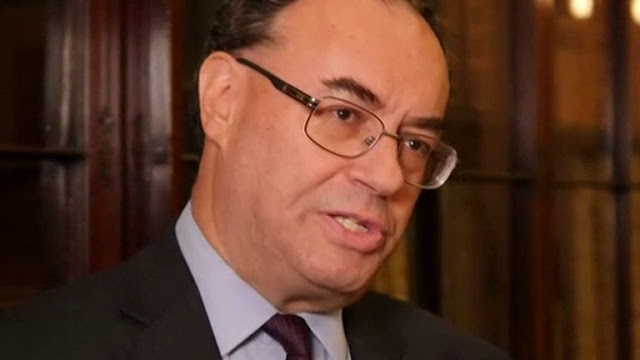 "Britain nearly went bust in March, says Bank of England", reads a headline in the Guardian. In similar vein, the Telegraph's Business section reports "UK finances were close to collapse, says Governor":
Eh, what? The Governor of the Bank of England says the UK nearly turned into Venezuela? Well, that's what the Telegraph seems to think:

The Bank of England was forced to save the Government from potential financial collapse as markets seized up at the height of the coronavirus crisis, Governor Andrew Bailey has said. In his most explicit comments yet on the country's precarious position in mid-March, Mr Bailey said 'serious disorder' broke out after panicking investors sold UK government bonds in a desperate hunt for cash. It left Britain at risk of failing to auction off the gilts needed to fund crucial spending - and Threadneedle Street had to pump £200bn into markets to restore a semblance of order.

Reading this, you would think that the UK government's emergency gilt issues had triggered a sterling market meltdown, wouldn't you? If this is indeed what happened, then the Bank of England has strayed far beyond its mandate and compromised its independence. Why on earth the Governor would voluntarily admit this surely requires some explanation. After all, if it is true, it could cost him his job.
The source for the Telegraph's extraordinary claim is this 51-minute podcast from Sky News, in which Sky's economics editor Ed Conway and former Chancellor Sajid Javid grill the Governor on his handling of monetary policy during the coronavirus crisis. The particular part of the interview that has raised eyebrows is in this clip, which I have transcribed here:

Bailey: We basically had a pretty near meltdown of some of the core financial markets….I got to Wednesday afternoon, and the markets team came down here, and you know it’s not good when they turn up en masse, and you know it’s not good when they say “we’ve got to talk”, and it wasn’t good. We were in a state of borderline disorderly, I mean it was disorderly in the sense that when you looked at the volatility in what was core markets, I mean core exchange rates, core government bond markets, we were seeing things that were pretty unprecedented certainly in recent times, and we were facing serious disorder.

Conway: How scary was that? What would have happened if the Bank hadn’t stepped in?

Bailey: “Oh I think the prospects would have been very bad. We would have had a situation in which in the worst element the Government would have struggled to fund itself in the short run”.

Or - did it? Government struggling to fund itself "in the short run" simply means that it might have needed to pay out money before it could raise it. Normally it would cover short-term cash needs by issuing Treasury bills, which are short-dated, highly liquid bonds with very low interest rates. But when markets are malfunctioning, it can't do this. And high-interest gilts or pandemic bonds would take time to issue. So it could potentially find itself short of ready cash for urgent spending.

However, as I have explained before, not being able to raise immediate funds for an urgent purchase is not insolvency, it is illiquidity. Relieving temporary illiquidity is what central banks do, and have done since the time of Bagehot. Historically they have done so not only for banks, but also for governments. And in the UK, the Bank of England still bears this responsibliity. The Ways and Means overdraft (which was extended in April) is the living evidence of the Bank of England's role as liquidity provider of last resort for the UK Government. But it is simply a working capital overdraft, such as any solvent business would have. Using this overdraft in no way implies that the Government is "insolvent", "bust", "bankrupt" or any of the other inflammatory headlines that journalists like to use. And nor does it mean the Bank of England is financing government deficit spending on anything other than a very short-term basis. It simply smooths out cash flow.
Conway's assertion that the Government was "within a whisker of insolvency" is total nonsense, as is the Guardian's claim that "Britain nearly went bust in March". The Government was not shut out of markets long-term, as an insolvent sovereign would be. It had short-term cash flow problems solely because markets were malfunctioning.  Indeed, in another part of the interview Bailey said exactly this (my emphasis):

Conway: At the time you were nervous about government not being able to finance itself.

Bailey: Yes, because of market instability.

Bailey went on to explain that the reason why the Bank intervened was not because the Government was having funding difficulties, but because market instability was driving up interest rates across the entire economy, and indeed across the whole world:

How would this have played out if we hadn’t taken the action that we and other central banks took? I think you would have seen a risk premium enter into interest rates, I think markets would have priced in a risk premium, and it could have been quite substantial given the degree of instability we were seeing. That would have raised the effective borrowing cost throughout the economy. In terms of the Bank of England's objectives, that would have made it harder for us to achieve our objectives, both in terms of inflation and in terms of economic stability.

The market meltdown was weakening central banks' hold on interest rates. They had to act, not to protect government finances but to prevent monetary conditions from tightening sharply, potentially triggering a dangerous debt deflationary spiral. The first responsibility of central banks in this crisis has been to prevent an exogenous shock to the real economy from triggering a financial crisis that would amplify the shock and significantly deepen the inevitable recession. That's what the exceptional interventions by central banks, including the Bank of England, since March have been all about.
Bailey observed that although the UK Government was the largest borrower in the sterling market, it was far from the only one. Big corporations were borrowing enormous amounts, both in the market and from banks. Interest rates were rising on their bonds as well as government bonds. So the fact that the Government was the largest borrower was "actually largely irrelevant to that argument about a risk premium and an increase in the effective rate of interest."
Bailey said that the £200bn of QE announced by the Bank of England the day after his crisis meeting with the markets team was to provide emergency liquidity to the whole market.  By injecting very large amounts of liquidity into the market, the Bank of England aimed to slake investors' thirst for cash and stop the fire sales that were driving up interest rates. And it succeeded. As a by-product of this action, the UK Government regained access to short-term market funding. But Bailey insists that ensuring the Government could fund itself was not the primary target. Regaining control of interest rates was.
The market meltdown in March also affected banks. It's a measure of how far we have come since 2008 that Conway & Co made nothing of the fact that the Bank of England had to provide emergency liquidity support to banks. Keeping banks afloat when markets are melting down is all in a day's work for a central bank, these days. Nothing to look at at all. But if a central bank provides emergency liquidity support to a government struggling to raise short-term cash when markets are melting down, that means the government is bust, the central bank is captive and the country is Venezuela? How utterly absurd.
I found the interviewers' constant focus on government financing a serious distraction from what was an important story about the Bank's vital responsibility for ensuring the smooth operation of financial markets. When financial markets melt down as they did in 2008, the whole world suffers. Central banks saw the same thing happening again in March 2020, and acted to stop it. And their action was extremely effective. It seemed to me that this was the story Bailey really wanted to tell, but the interviewers were intent on pushing him towards the issue of monetary financing and the Bank's independence. Sajid Javid, in particular, seemed to want Bailey to paint the Chancellor's handling of the crisis as irresponsible and profligate. Which genius at Sky News thought it was a good idea for the Chancellor who was forced out of his job without ever producing a Budget to discuss the performance of his successor with the Governor of the Bank of England?
Finally, it is extremely unfortunate that none of the media reports highlighted Bailey's strong endorsement of the Government's exceptional measures to support people through this crisis:

It's entirely necessary that the state has to step in at this point. In a shock of this nature, you can't leave it to individual citizens to find their way through it, "well, good luck" sort of thing. The state has to assert its role at this point, which it did. It wasn't easy, but it did it.

Fiscal policy is pre-eminent. The Bank of England's job is to ensure the smooth functioning of markets and keep the economy as stable as possible so that the Government can support people through this crisis. And that is what it is doing - successfully. This, not "Britain nearly went bust", is what should be on the front page of every newspaper.
Related reading:
Pandemic economics and the role of central banks
The End of Britain?
Bank of England central banks coronavirus Financial Crisis financial stability fiscal policy government debt Interest rates markets Monetary Policy recession UK 2020-06-23
Frances Coppola
Full story here
Are you the author?
0 0

I’m Frances Coppola, writer, singer and twitterer extraordinaire. I am politically non-aligned and economically neutral (I do not regard myself as “belonging” to any particular school of economics). I do not give investment advice and I have no investments.Coppola Comment is my main blog. I am also the author of the Singing is Easy blog, where I write about singing, teaching and muscial expression, and Still Life With Paradox, which contains personal reflections on life, faith and morality.
My articlesMy siteAbout meMy books
Follow on:TwitterSeeking Alpha
Previous The true story of NI autocredits
Next What went wrong at intu?